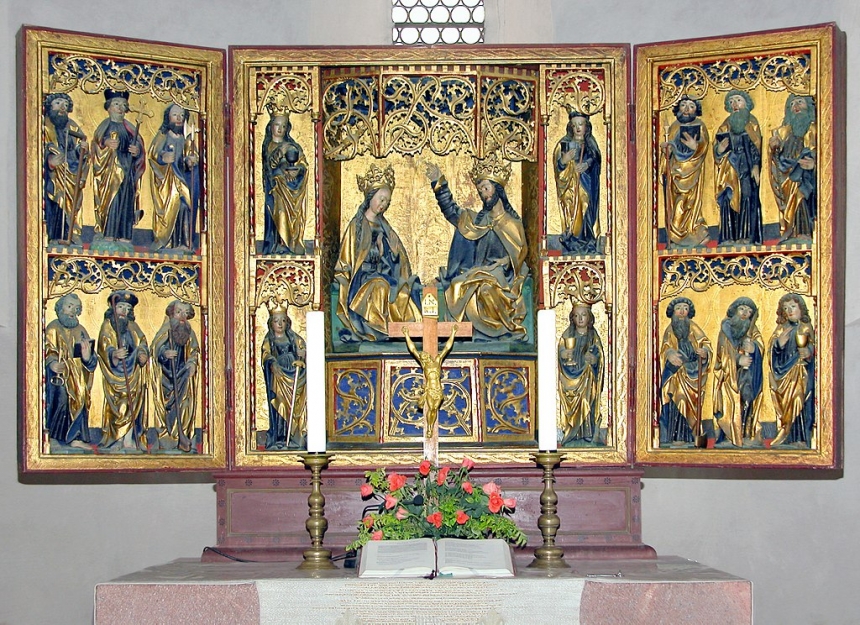 An unidentified person climbed the facade of the Kilianskirche in Bad Lausick, smashed a 4-meter stained glass window, and entered the church sometime between 10:30 pm and 12:30 am during the night of April 21st to 22nd. Once inside, the vandal severely damaged the carved late Gothic altar and pulpit with a sword. A chandelier was shattered onto the ground and a candlestick was damaged. Disastrous damage was avoided after altar candles, deliberately left burning in the wooden tower, went out before causing a fire.

Reverend Thomas Erler said he expected the repairs and restoration would cost many thousands of euros. Heavier than this loss, he said, was the sudden feeling of insecurity, and pain caused by the desecration of the church caused. He said, "If in such a tranquil city not even the church is safe, one wonders: Am I still safe in my home?"

"I am very angry because people do not respect the feelings of others, it is difficult to digest," said Manfred Schön, president of the St. Kilianskirche Association (Fördervereins St. Kilianskirche), which has been working for years to renovate the more than 900-year-old church and its cultural and historical treasures.

Michael Fengler from the press office of the Leipzig Police Department said they were closely examining whether there was any connection in this case with the destruction of two churches in Chemnitz. The police in Chemnitz earlier in the week had arrested a 24-year-old asylum seeker from Pakistan and he was admitted to a psychiatric unit, where he remained at the time of the Kilianskirche rampage.

The Criminal Division of the Grimma police took over the Bad Lausick investigation and witnesses are requested to contact at 034345/708925100.