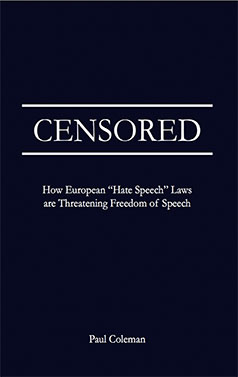 How European „Hate Speech“ Laws Are Threatening Freedom of Speech

Despite the importance of freedom of speech and robust public debate, the nations of Europe have all adopted criminal laws against so-called “hate speech.” In Germany, for example, committing an insult is a criminal offence and in Poland offending religious feelings carries a two year prison sentence. In Cyprus, anyone who promotes feelings of ill will may be committing a crime, while in Sweden anyone who expresses contempt towards a group of persons may be imprisoned.

This book seeks to challenge this prevailing orthodoxy by detailing the stark history of the internationalization of “hate speech” laws, their present day application, and their possible future. Fifty “hate speech” cases are discussed and a fully up-to-date compendium containing hundreds of European “hate speech” laws is included.

Paul B. Coleman is legal counsel for Alliance Defending Freedom at its office in Vienna, Austria, where he specializes in international litigation with a focus on European law.