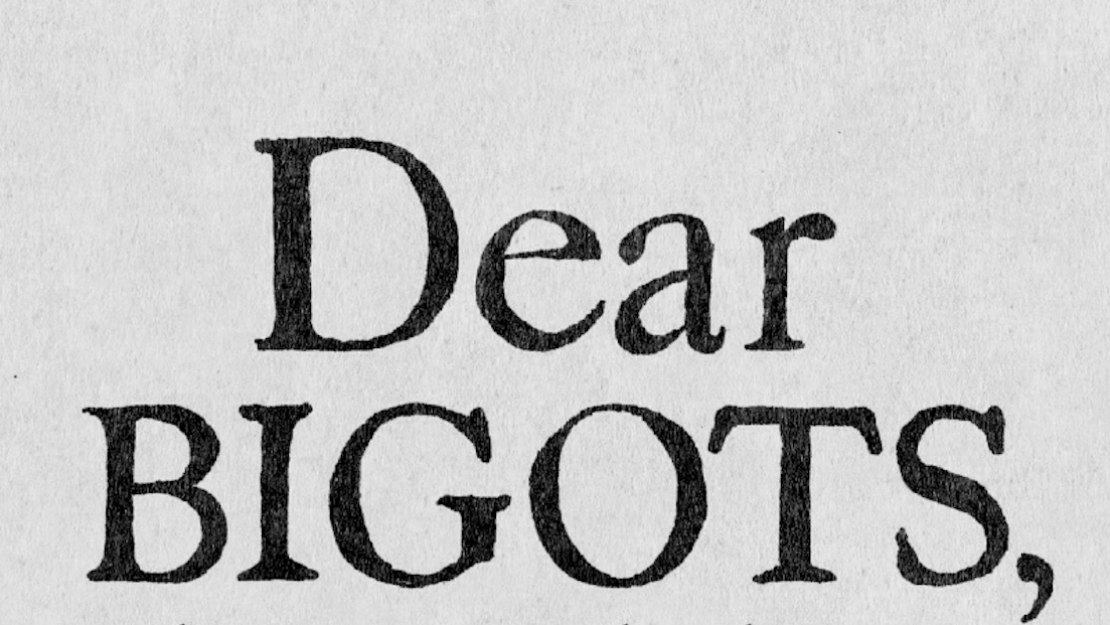 An anti-hate crime campaign One Scotland, launched in September 2018 by the Scottish police and government, includes a poster directed toward religious believers which reads (in part), “Dear Bigots, you can’t spread your religious hatred here. End of sermon. Yours, Scotland.” Other posters in the campaign were directed toward 'transphobes' and 'homophobes.' Critics of the campaign have noted that it singles out religious believers and calls them bigots without any qualification, and it is based on a political ideology which discriminates against those who hold traditional views.

A Christian Minister, David Robertson, wrote: “The posters say ‘love lives in this country, not hate’ — whilst encouraging people to hate anyone who dares to disagree with their new State morality.  They should say ‘insanity lives in this country’. We are moving towards an Orwellian State where the in the name of love we are taught to hate all who do not agree with the State’s philosophy.”

He reported the posters to the authorities as a "hate incident," saying: “By your own criteria your posters, especially the one on religion is a hate incident. I perceive it as being motivated by hate and prejudice. Why? In my day-to-day life I experience a great deal of anti-Christian prejudice, fuelled by ignorance and prejudice. Your poster will just add to that. You imply that it is religious people who are responsible for what you call homophobia and transphobia (although you don’t define what you mean by these terms — is being opposed to SSM ‘homophobia’?  Is believing that a woman is a ‘female adult human’ transphobia? By not defining your terms you have of course left room for people to claim your support for anything that they determine is ‘phobic’).”

"This poster campaign is not about stopping ‘hate’ against all people – it’s a selective campaign based upon a political ideology designed to discriminate in favour of certain groups and against others." commented Robertson on his blog The Wee Flea, where he wrote about his exchange with the Scootish police about the campaign.

The full text reads: “Dear bigots, division seems to be what you believe in. We don’t want your religious hate on our buses, on our streets and in our communities. We don’t want you spreading your intolerance. Or making people’s lives a misery because of their religious dress. You may not have faith in respect and love, but we do. That’s why if we see or hear your hate, we’re reporting you. End of sermon. Yours, Scotland.”

Other posters in the campaign read: “Dear transphobes, do you think it’s right to harass people in the street? Right to push transgender people around in clubs? Right to humiliate, intimidate and threaten them online? Well we don’t. That’s why if we see you doing harm, we’re reporting you. We believe people should be allowed to be themselves. Except if they’re spreading hate. Yours, Scotland.”

And still another: “Dear homophobes, we have a phobia of your behaviour. If you torment people because of who they love, shout words that we are not going to write, or use violence because you don’t like who someone is holding hands with, you should be worried. If we see or hear your abuse, we’re calling the police. That’s because love lives in this country, not hate. Yours, Scotland.”

Sources: One Scotland, The Times and The Stream