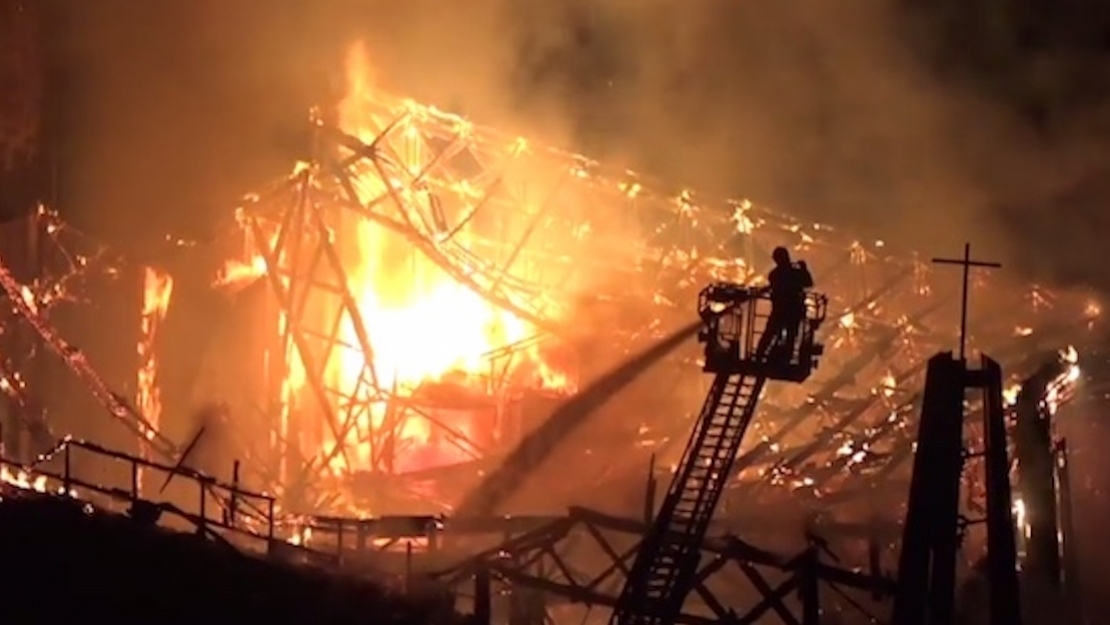 The church, whose frame was made of wood, was completely destroyed in a fire during the night of January 16th to 17th. When the firefighters arrived on site at 2:30 am, the church was already totally engulfed, and they could only prevent the flames from spreading to neighboring buildings. A hundred people had to be evacuated. The initial investigation indicated that the fire had started with a short circuit in the electrical system, however, an anarcho-libertarian blog post claimed responsibility. On October 7th, prosecutors said accelerants were found in the rubble and the fire would be treated as arson.

According to a parishioner, pro-abortion graffiti such as "béni soit l’avortement" ("blessed abortion") had been painted on the church a few days before the fire after the parish priest announced he was organizing a bus trip to the March for Life in Paris on January 20th.

Just a day after it was announced that the cause of the fire was a short circuit, an anonymous post entitled "The only church that..." appeared in an anarcho-libertarian online forum. This line is the beginning of an infamous anarchist tagline "the only church that illuminates is one that burns." In the post, the writer claimed responsibility for the fire, saying they had "unleashed their fury by burning the church" and "all those who feel hurt by this attack take the measure of our anger and assume the consequences of their role in spreading and supporting ideologies that aim to control our lives, our bodies and our emotions." The post was signed "Short circuits" ("Des courts-circuits").

As a result of the the anarchist post the prosecutor, who called the claim "opportunistic" and contrary to the first conclusions of the investigation, said the investigation into the cause of the devastating fire would continue and that is was a reminder to remain vigilent while the investigation was still in progress.

During the night of January 27th to 28th, a fire destroyed the premises of France Bleu Isère. A few days later, anarcho-libertarians claimed responsibility for that fire, as well. The prosecutor announced that the claims would be taken seriously and the investigation was ongoing.

According to the local daily Le Dauphiné Libéré, as of February 4th, the accidental nature of the fire was "no longer in doubt."

After the October 2019 announcement, the Diocese of Grenoble reacted with shock and sadness. "The Catholic Church in Isère is once again wounded by this revelation," wrote Bishop Guy de Kerimel of Grenoble-Vienne, in a statement dated October 9. "This criminal action is an attack on freedom of conscience, freedom of religion, and the quality of life together," he continued, observing that "this attack seems to be part of a wave of arson attacks targeting symbolic places in the Grenoble area."