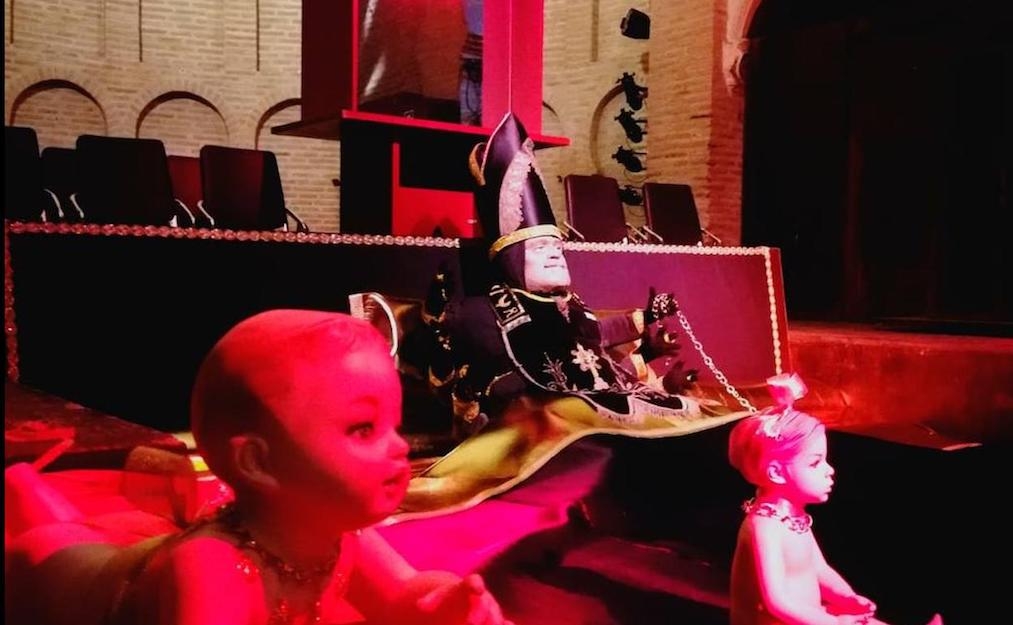 The Spanish Association of Christian Lawyers has sought a court order to shut down an artist’s installation entitled "Pederoclastia" that contains "ornaments used in Catholic worship" and "figures of children in explicitly sexual postures." The Association also said on July 19 that it would file a criminal complaint against artist Fernando Barredo de Valenzuela (who is also the coordinator for Toledo Laica) for offending religious sentiments and inciting hatred, and may take steps against the Círculo de Arte de Toledo for "attacking the feelings of Catholics." On July 25, Toledo’s Court of First Instance No 2 opened a preliminary investigation into the possibility that the case constituted corruption of minors but had not ordered the exhibition to be shut down.

The montage is of a 6-armed figure dressed in a dark chasuble and miter sitting up in a bed and flanked by the figures of a naked youth with an erection and others of naked children and infants, all chained to the ‘bishop’.

On July 25, newspaper ABC reported that Toledo’s Court of First Instance No 2 had opened a preliminary investigation into the possibility that the case constitutes corruption of minors but had not ordered the exhibition to be shut down.

Association President Polonia Castellanos said her organization would appeal the failure to close the exhibition.

“It is illogical that people can continue visiting a work that the judge himself considers might involve…a crime of corruption of  minors,” ABC quoted her as saying.

Barredo was quoted by online news site 20 Minutos as saying his work "denounces the atrocious pederasty practiced, consented to, covered up and even rewarded at the heart of the Catholic Church and which, in the case of Spain, only the tip of iceberg is seen, given that the (church) continues to hide" the number of complaints filed against it.

The work is “not an attack on all priests, only those who have sexually abused children, or who have vilely raped them while their prelates have covered up for them,” said a statement from the Círculo de Arte.

Toledo Archbishop Braulio Rodriguez Plaza, in a pastoral letter, has labeled the exhibit as "grotesque" and an "insult." He acknowledged that there are clergy guilty of sexually abusing children, and that this is an "unacceptable" practice. But “pederasty is a problem throughout Spanish society, and we know where it abounds the most: in families, in sports centers and elsewhere.”

Castellanos has complained that it is “always persons or parties linked to the most radical left…that attack Christians, and this is something that must not be allowed…. It is intolerable that they invoke freedom of expression to insult and upset Christians and offend our beliefs.”

Barreda was quoted as describing the Spanish Catholic Church as "a tick even larger than the dog of the state, which it continues sucking incessantly," whose clergy "exercise the droit de seigneur over the children of the faithful…with neither other, decent Christians nor society at large reacting against them with due forcefulness. It is artists and other intellectuals who have to break the silence and be an example of rebellion."