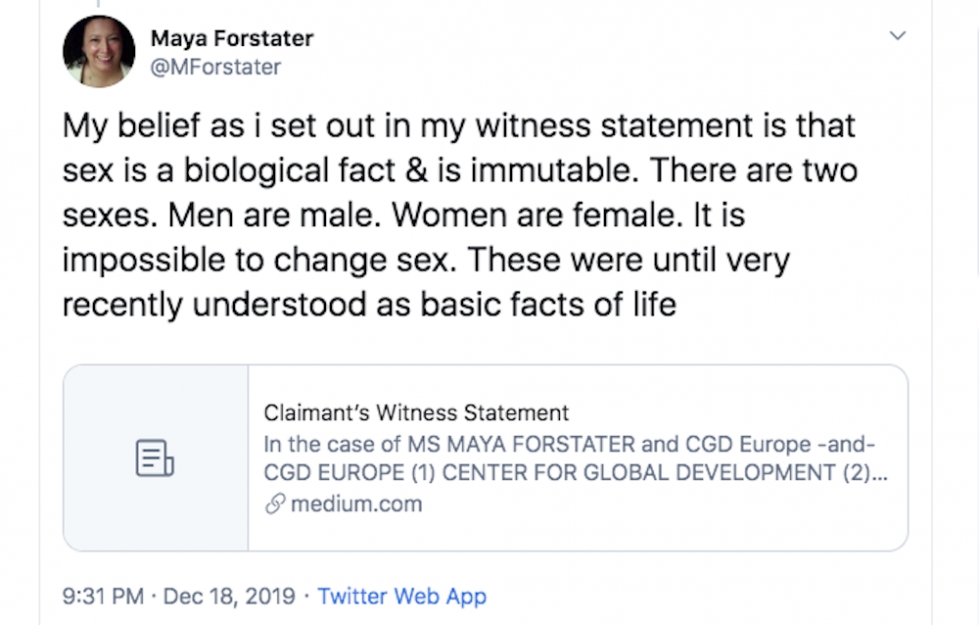 On December 18th, a judge in an employment tribunal ruled against Maya Forstater, a tax expert at the Centre for Global Development, who defended her right to say on social media that men cannot become ‘women’ by undergoing gender reassignment treatment. Employment Judge Taylor ruled that her belief that biological sex cannot be changed “did not have the protected characteristic of a philosophical belief.” She had tweeted that “men cannot change into women” as part of an argument about the government’s proposed reforms to the Gender Recognition Act. This was not deemed a "protected belief" under the Equality Act 2010.

Forstater was supported by the well-known NGO defending freedom of expression Index On Censorship. While Forstater's view is not based on religious belief, this judgment resembles a previous ruling from an employment tribunal in Birmingham, England, where a Christian doctor, Dr. David Mackereth, refused to use transgender pronouns in a hypothetical scenario and was fired from his job. Mackereth had argued that his firing was an example of religious discrimination, but the tribunal disagreed, ruling that not believing in transgenderism is "incompatible with human dignity."

In the judgment against Forstater, the employment judge wrote: "I conclude from … the totality of the evidence, that [Forstater] is absolutist in her view of sex and it is a core component of her belief that she will refer to a person by the sex she considered appropriate even if it violates their dignity and/or creates an intimidating, hostile, degrading, humiliating or offensive environment. The approach is not worthy of respect in a democratic society."

Maya Forstater’s response to the judgment is as follows: "My belief … is that sex is a biological fact, and is immutable. There are two sexes, male and female. Men and boys are male. Women and girls are female. It is impossible to change sex. These were until very recently understood as basic facts of life by almost everyone."

She also rightly warns that the judgment would allow persecution of all who tell the truth.

"This judgment removes women’s rights and the right to freedom of belief and speech. It gives judicial licence for women and men who speak up for objective truth and clear debate to be subject to aggression, bullying, no-platforming and economic punishment."