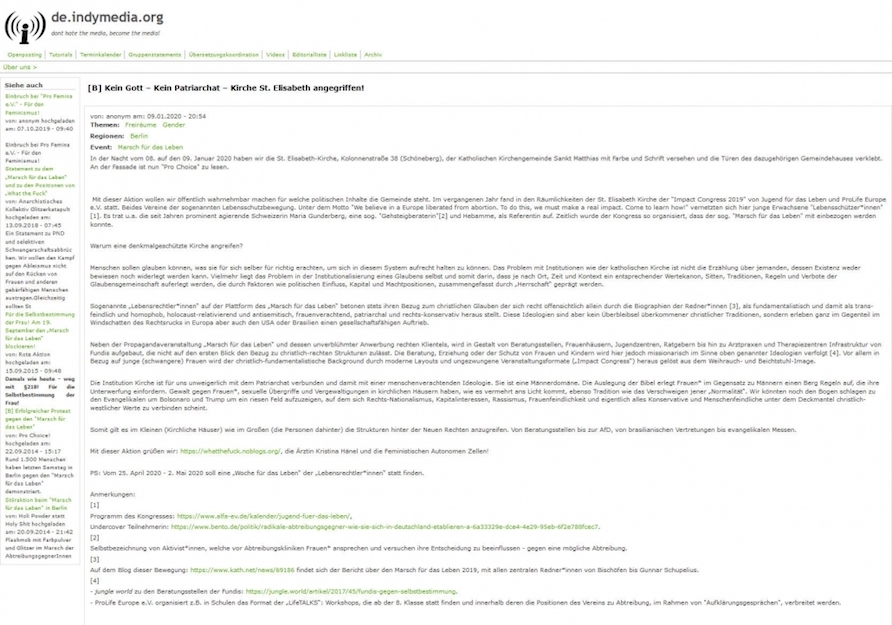 During the night between the 8th and 9th of January 2020 unknown perpetrators vandalized the historic building of St. Elisabeth-Kirche in Berlin-Schöneberg with black and white paint, sprayed the words “Pro Choice” on its entrance doors together with other unidentifiable symbols and glued the parish hall doors closed. A purported confession letter was later posted on the extreme left platform de.indymedia.org, naming a Berlin feminist/left-wing radical alliance as responsible for the vandalism.

In the anonymous confession letter the authors criticize the parish for its active engagement in the pro-life movement, saying that they wanted to draw attention to its political impact. They explained that the attack was in response to the pre-march event “Impact Congress 2019,” which was aimed at connecting pro-life activists throughout Europe. This, according to the vandals, was unacceptable because the March for Life would only serve as platform for “fundamentalist, anti-trans, homophobic, anti-Semitic, misogynist, patriarchal and right-wing conservative” speakers. Further, they called the institution of the church "inevitably connected to the patriarchy and thus with an inhumane ideology."

They wrote "it is necessary to attack the structures behind the New Right on both a small scale (church houses) and on a large scale (the people behind them). From counseling centres to the AfD, from Brazilian representations to evangelical masses."

The authors, claiming to be the feminist and left-wing radical Berlin alliance "What The Fuck," also made reference the radical "Autonomous Feminist Cell" (Feministischen Autonomen Zellen) and the abortion defender and doctor Kristina Hänel, who was fined several times after having violated the German law that prohibits the promotion of abortions.

The Federal Association for the Right to Life (Bundesverband Lebensrecht e.V., or “BVL”) reacted to the vandalism by posting a letter on its website condemning the vandalism as a “cowardly, underhanded act” and refute the claims, saying that they do not “recruit” any speaker of any ideology. “We exclusively promote the cause, namely the unrestricted right of any human being to his life, no matter where he comes from, what he looks like, what his religious or political attitude is, or where he is,” said the letter from the BVL. The letter concluded with a call to action: "The Federal Association for the Right to Life calls on all people who are committed to human dignity and human rights to publicly and clearly stand up for these values and against hate slogans and cowardly attacks."

In another confession letter posted online on the same website a “Autonomous Feminist Cell” had claimed responsibility for the arson attack on a minibus belonging to a free evangelical church in Tübingen on December 27th of last year, whose damage costs are estimated to be around 40.000 Euros as well as the arson attack on journalist Gunnar Schupelius’s car on New Year's Eve.