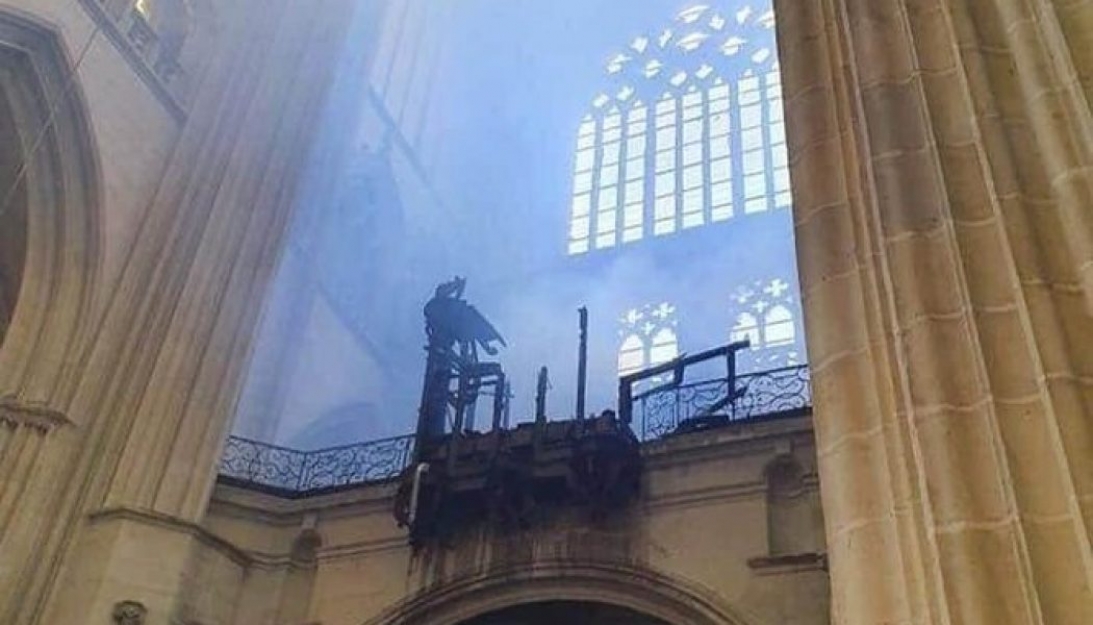 In the early morning hours of July 18th, a fire began in the Saint-Pierre-et-Saint-Paul cathedral, in the heart of Nantes. Passers-by saw flames behind the rosette window of the cathedral and alerted emergency services a little before 8:00 am. When firefighters arrived, they discovered "a violent fire at the level of the organ located behind the rosette window." Upon further investigation, it appeared that the fire had started in three locations: one fire had started near the organ, while the other two were at the other end of the cathedral.

"When we arrive at a place where a fire has taken place, and you see three separate fire outbreaks, it's a question of common sense, you open an [arson] investigation," Nantes prosecutor Pierre Sennès said. He clarified that there was no trace of an external break-in.

UPDATE: On the afternoon of July 18th, a volunteer from the diocese of Nantes was placed in police custody as part of the investigation into the fire. This man "was responsible for closing the cathedral on Friday evening and investigators wanted to clarify certain elements of this person's schedule," Pierre Sennès told AFP. The investigators also wish to hear this man "on the conditions of closing of the cathedral," added the prosecutor.

The magistrate underlined that "any interpretation which could implicate this person in the commission of the facts is premature and hasty." "We must remain cautious about the interpretation of this custody, it is a normal procedure," he said.

Later on Sunday the 19th, however, Sennes confirmed that the man had been released "without charge."

Before his release, Quentin Chabert, a lawyer for the volunteer, told reporters that "there is nothing that directly links my client to the fire."

The volunteer, in his thirties, is a Catholic Rwandan accommodated by the Diocese along with others. He sought to renew his visa [which expired in March 2020] and "was in discussion with the Prefecture on this point," the prosecutor said.

"I don't believe for a second that he could have set fire to the cathedral. It's a place he loves," says Jean-Charles Nowak, clerk of the cathedral. "He is a man of duty, very kind, smiling but rather silent. I know that he has many health problems and that he suffered a lot in Rwanda. He did a service for Father Champenois who had no one to serve Mass on Saturday night. So he was also a regular Mass server." The rector of the cathedral, Hubert Champenois, said he had "total confidence" in this volunteer: "It fell on him because he was the one who closed the cathedral," he said.

The mayor of Nantes, Johanna Rolland, who was able to enter the cathedral, expressed her emotion when she discovered the damage: “What dominates is the emotion and sadness for Nantes Catholics, because it is an emblematic place, but beyond that, for all the people of Nantes."

Father François Renaud, who oversees the cathedral, surveyed the damage with firemen and said the organ was completely destroyed, describing it as "an unimaginable loss."

"The console of the choir organ has gone up in smoke along with the adjoining wooden choir stalls. Original stained glass windows behind the great organ have all shattered," he said.

Along with the destroyed organ, officials said other items lost included a painting by 19th century artist Hippolyte Flandrin and stained glass windows on the facade, some of which contained remnants of 16th century glass.

The organ dated back to 1621 and had undergone five restorations since. During the 18th century revolutionary period, authorities had wanted to melt down its pipes for scrap, but it was saved when the organist argued it could instead be used for "revolutionary ceremonies," according to historian Paul Chopelin.