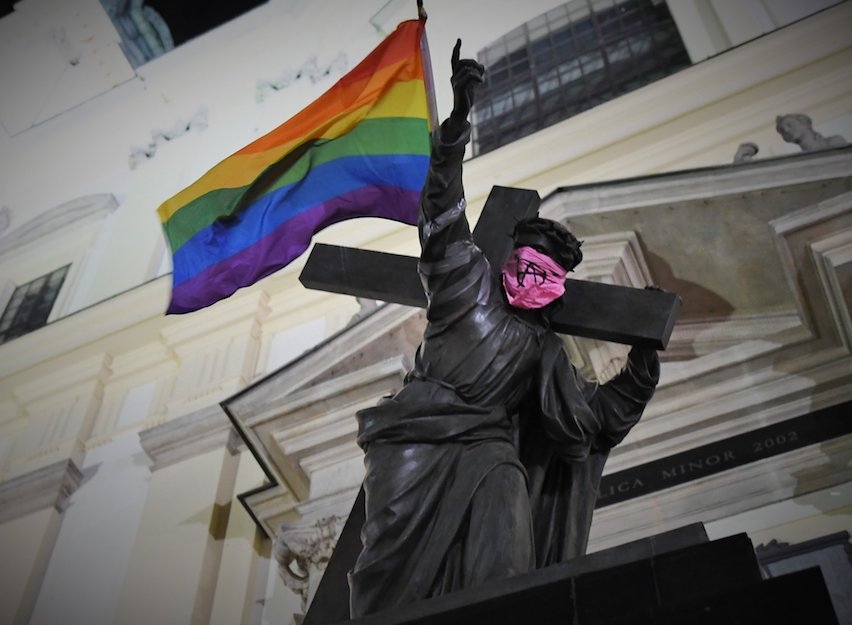 During the night of July 28th activists from the self-described "anarchist-queer" community launched what they termed a "rainbow assault" across Warsaw. They placed a rainbow flag on the statue of Jesus Christ carrying the Cross in front of the Basilica and attached a purple anarchist bandana over Christ's face. Several of Warsaw's other famous monuments were similarly targeted. The activists left cards with a "manifesto" beginning with the phrases "This is an assault! It's a rainbow. It's an attack! We've decided to act." The message went on to say their provocative actions would continue until Polish society accepted them.

Sebastian Kaleta, the Polish Deputy Minister of Justice, condemmed the action on Twitter: "The offensive of the left continues. Today it is all the more symbolic because they have chosen the monument of Christ in front of the Basilica of the Holy Cross in Krakowskie Przedmiescie as their target on the eve of the anniversary of the Warsaw Uprising..."

Jerzy Kwaśniewski, President of the Ordo Iuris Institute for Legal Culture, noted that the day before the incidents, EU commissioners condemned "free local governments for supporting family rights and resistance to LGBT ideology. Today LGBT activists provocatively desecrate a symbol of Polish freedom and solidarity, the figure of Christ in Krakowskie Przedmieście. This is a promotion of tolerance?"

The European Union had announced that it rejected grants under a "twinning programme" to the six Polish cities that adopted ‘LGBTI ideology free zones’ or ‘family rights’ resolutions.