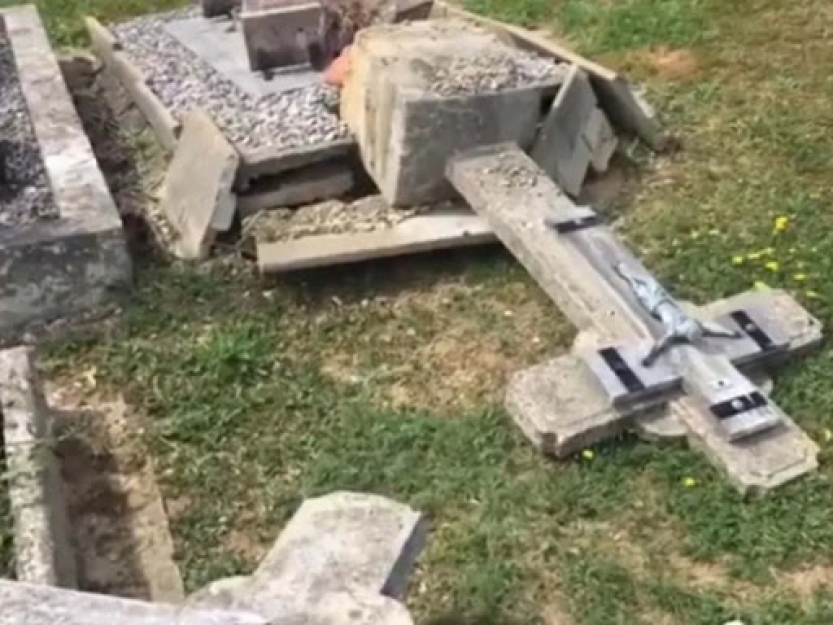 During the night of August 9th, 63 tombs were vandalized and desecrated in the Lannemezan cemetery in the Hautes-Pyrénées region. Broken crosses and upside down plaques were discovered by family members. The police was alerted by the neighbors who heard the loud noise. A week later, the two young perpetrators were arrested and sentenced to 18 and 12 months in prison. According to their testimony the vandalism was driven by satanic motivations.

According to their testimony, 22 year-old Fabien and 23 year-old Jordan had initially planned to attack the cemetary in Galan, but went for the closer cemetary in Lannemezan instead because their car did not have enough fuel. Fabien had been in contact with a marabout from Mali who had explained him how to make a pact with the devil. He intended to make incantations at one o'clock in the morning in the cemetary to achieve fame and make a career in music. The two then started to vandalize the graves, causing Fabien to hurt himself and leave blood with his DNA at the scene. Jordan's cellphone was left behind as well. The damage amounts to more than 33,000 euros.

On August 20, Fabien was sentenced to 18 months in prison, including 10 months on probation for 2 years. He was obligated to take care of himself, to work, to follow a training course and to compensate the victims.

Jordan was sentenced to 12 months in prison, 6 of which on probation for 2 years.

On September 19th Monsignor Nicolas Brouwet, Bishop of the Diocese of Tarbes and Lourdes held a prayer for restoration for the desecrated tombs. Local residents, the affected families, political leaders and parish members of the church all attended the prayer, as it was a shock for the entire town of Lannemezan.

During his sermon Monsignor Nicolas Brouwet stated that: "one of the reasons that desecration is a serious act is that many people testify their faith in cemeteries. A cemetery is communal. People of all faiths are buried there, as well as people who do not have faith in God. (...) I can assure all the families whose graves have been vandalized of the solidarity of our diocese. We are ashamed and powerless when we see that young people, from our neighborhoods, from our villages, are capable of such disrespect, such sacrilege...".