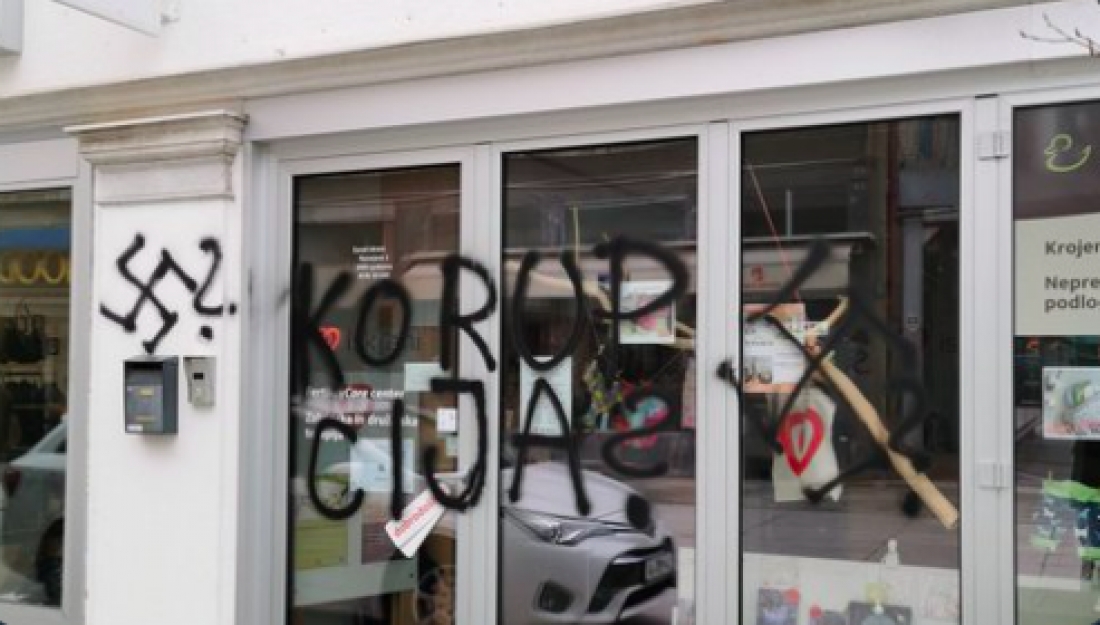 Vandals graffitied the facade of the Christian conservative institution Zavod Iskreni in Slovenia on the night of 2 February. The perpetrators broke the windows and smeared the entrance door of the institute with swastikas and wrote the word "corruption" on it. Minister of Defence Matej Tonin condemns this vandalism as a "systematic attack on Christian values". The police are investigating.

The act has already been condemned by many locals and Slovenian politicians. Similar cases of vandalism have happened in recent times.

Alenka Forte, the State Secretary at the Ministry of Health, experienced a very similar occurrence at the building in which she has her surgery. Three swastikas have been graffitied onto it. The Christian Conservative Institute wrote as a response to the act that this reflects the current state of mind in the country, where frustration, anger and intolerance are growing. Precisely intolerance towards innocent bystanders is said to be growing enforced by political and media incitement, according to Iskreni.

In an interview with local news, they added that the staff and volunteers working at the institute are not used to "such intense negative political and media attention". They are therefore particularly affected by it, "anxiety and fear set in, which are intensified after experiencing such an act of intimidation," they stated. They continued saying that they had to send some of their colleagues home because "it is impossible to work with clients in such an atmosphere".

The Zavoc Iskreni institute was co-founded by Janez Cigler Kralj, the Minister of Labour, Family, Social Affairs and Equal Opportunities. It had been awarded €130,000 in a call for tenders by the ministry. Cigler Kralj claimed to have had no participation in that decision. Iskreni expressed their wish that people, especially politicians and the media, would be more aware of "where this kind of treatment of an NGO that is not aware of such things leads".

The act at their headquarters was condemned by different parties, amongst others, Minister of Defence Matej Tonin, who shared a Tweet saying "Radical political positions that deny fundamental human rights to differently minded people and people with different values have always led in the wrong direction in history". He emphasized the importance of co-operation on every level for a Slovenia of pluralism, tolerance and respect for diversity.

A local Journalists tweet said, "Do you understand how psychology works when you incite and incite people against someone?", which has been responded to by the director of the Governmental Communications Office, Uroš Urbanija, who ruled the vandalism as unacceptable, including other attacks on Christian Institutions and believers. He acknowledged that "Tonin was right to point out that these are systematic attacks on Christians and our values".

The damage caused by that act has not yet been revealed. Members of the political SD party tweeted: "Corruption must be prosecuted by the institutions that are competent to do so. There is and should be no room for violence and vandalism in a democracy". he act is said to be the result of a political and media drive against the Iskreni Institute after it obtained public funding for its programmes in a public tender, originally launched by the Ministry of Labour, Family and Social Affairs.

After recent acts of hostile vandalism against various Catholic organisations, robberies of parished and destruction of works of art of cultural heritage, Slovanian Christians are particularly worried that those cases might escalate. Nina Maležič, office manager at the Iskreni Institute, describes that after the current media hype, no one knows what else is in store, for similar organizations and people of faith.

Once the Police completed their investigation more details about the act will be released to the public.