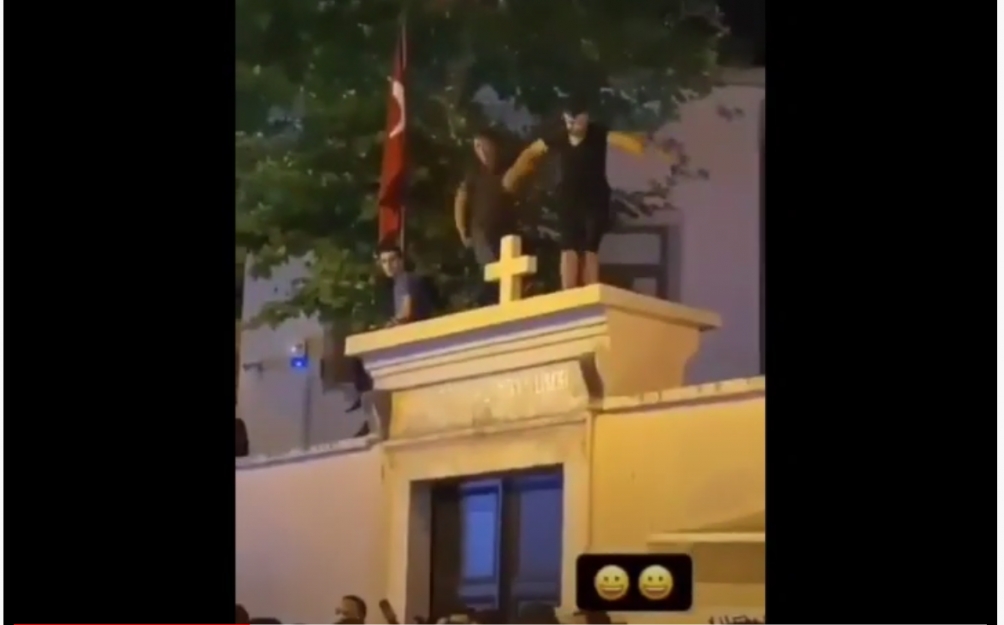 The Surp Takavor Armenian Church in Istanbul has been desecrated. A 14-second video appeared on social media showing three men dancing next to a stone cross atop the church's courtyard gate. It is thought to have happened on 10 July, as the video was released on the evening of 11 July. Turkish authorities detained the three suspects on 12 July, while they were in their homes. An investigation is underway.

The trio is thought to be a part of a group of revellers who allegedly protested against COVID-19 regulations. Footage of the street in the city's Kadıköy district, where the Church is located, shows people dancing to loud music. Another video shows people stopping and climbing a tow truck to dance on.

Süleyman Soylu, Turkey's interior Minister labelled the act as "disrespectful", while other social media users uttered their disgust with the action. In a Tweet, Soylu expressed his sadness over the incident directed to Arman Bükücüyan the director of the foundation in charge of the church.

“Our civilization never tolerates insulting or mocking acts at places of worship,” stated Numan Kurtulmuş, Deputy Chairperson of the ruling Justice and Development Party Group (AK Party). Fahrettin Altun, the Presidential Communications Director, condemned the incident stating: “We strongly condemn the desecration against the Surp Takavor Church in Kadıköy. The right to freedom of religion and conscience is essential. Places of worship are sacred and inviolable. Those who carried out this act of desecration will be held accountable before the law. Our nation, as it has in the past, will not give credit to provocations of this nature.”

Altun defended the freedom of religion and conscience as they are crucial and places of worship sacred. In 2018 the same church had been desecrated by racially offensive graffiti.

Christians and Armenians are outraged since the suspects were released 48 hours after being brought in, with two of them put on probation. Another highly criticised point is Turkey's silence regarding the desecration of other churches throughout the country.