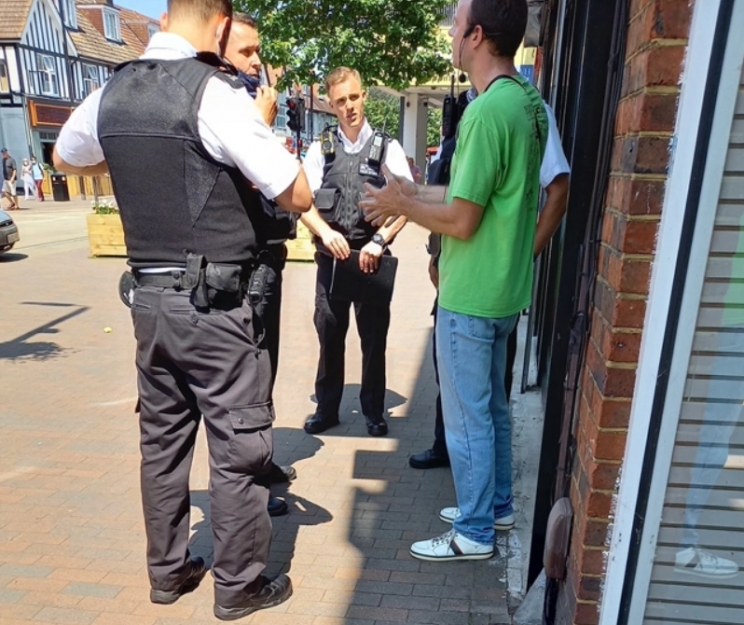 Ryan Schiavo was arrested in London for preaching on the streets that "homosexuality is a sin" or that "churches that have rainbow flags on them are not real churches". A woman who heard him called the police and some minutes later he was arrested. The incident was recorded by a friend of the street preacher.

Schiavo received a lot of hostility for his comments, but he was also supported by viewers who did not agree to his religious beliefs, but also considered that he had not committed any crime to be arrested. An atheist man who is seen in the video said that he disagreed with 99% of what Schiavo said, but he argued to the police that the preacher had not "done anything warranting … an arrest," and that he was "just exercising his freedom of speech.’”

According to Section 4A of the Public Order Act, Schiavo was causing “intentional harassment, alarm, or distress.” The law declares that “a person is guilty of an offense if, with intent to cause a person harassment, alarm, or distress, he — (a) uses threatening, abusive or insulting words or behavior, or disorderly behavior, or (b) displays any writing, sign or other visible representation which is threatening, abusive or insulting.”

As he related to the Christian Post newspaper, he was "put in a cell for 10 hours and given a mental health evaluation by the National Health Service before being released in the middle of the night.” During the mental evaluation that he had to undergo, he says that they tried to “convince" him "not to talk about homosexuality in public anymore.” He told Christian Post that the mental health evaluator "wanted" Schiavo "to affirm him and just say, ‘OK,’ and agree, and I never did.”

He also explained how he has seen these incidents in the whole world and the UK in particular, where the British law seems to protect particularly LGTBQ+ communities and Muslims. Schiavo said “you cannot speak against homosexuality or transgenderism and you can’t speak against Islam (...) and so when they hear that word, they’re immediately thinking ‘hate crime,’ ‘hate crime.’”

Schiavo is not the first Evangelist preacher to experience a similar situation for preaching Christian teachings. The British Pastor John Sherwood was arrested by police in April in the Northwest London town of Uxbridge for emphasizing how the Bible defines marriage.