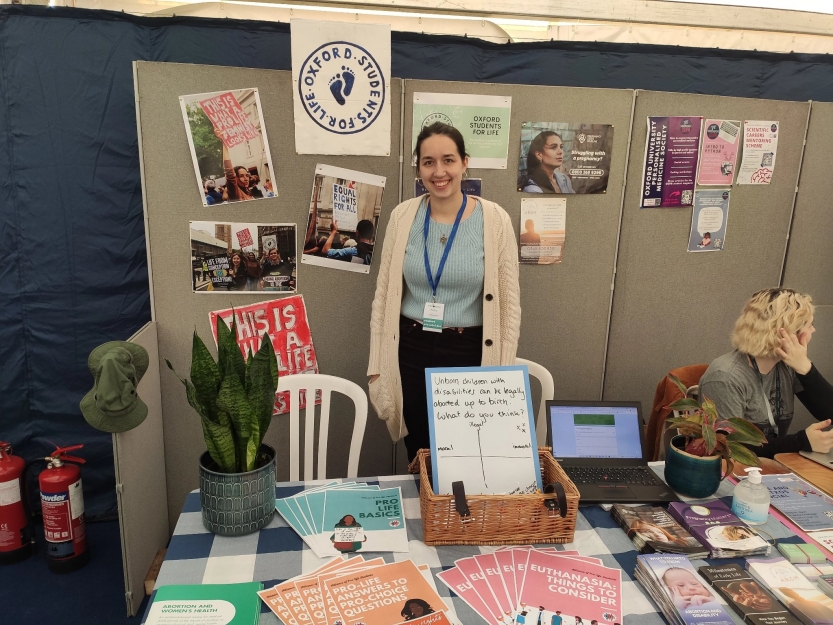 During the yearly Freshers' Fair at the Oxford University, the stand of the Pro-life group "Oxford Students For Life" (OSFL) was removed by other students and activists, who threw their material into a trash bin and completely removed it from the event. The students also refused to let them reinstall their stand and threatened them with tearing it down again. The group had already been criticized on the internet, as they posted some photos of their stand. The "Oxford Feminist Society" made a statement that the presence of a pro-life organization was a "threat to the safety, health, and autonomy of women", which was backed by the Students Union. The University of Oxford condemned the censorship and harassment of the pro-life group by stating that the university had a long history of protecting free speech.

A spokesman for the university said: "The university supports the right of all our students and student groups to express views of all persuasions within the law. We therefore condemn this afternoon’s protest against the Oxford Students for Life stall, which was an attempt to deny the right of expression to others. We have robust freedom of speech policy which states that 'within the bounds set by law, all voices or views which any member of our community considers relevant should be given the chance of a hearing'." (The Telegraph)

The President of OSFL also defended the group’s presence at the event, arguing that a discussion around abortion was necessary and productive: “Like most student societies of the University, we use the Freshers’ Fair to promote our mission and events. We are a secular, non-sectarian society, seeking to promote the culture of life at the University and beyond, by fostering discussion and education on beginning and end of life ethical issues, from a pro-life perspective. As someone who describes herself as a pro-life feminist, I believe promoting discussion and serious reflection on issues like abortion which affect women so profoundly is not only deeply worthwhile but necessary.”

He continued to say: ‘Many students from all sides of the abortion debate have engaged positively with our stall over the Fair, and we’ve had a huge amount of compassionate and respectful conversations about these ethical issues. We are disappointed that a small group of students decided to take direct action against our stall, and are grateful to those working at the fair who have worked to protect our right to maintain our presence there.’

Similarly, the Student Union’s Women* Campaign also urged the OSFL to consider its messages and the impact it had on women: “In response to the presence of Oxford Students For Life at Freshers’ Fair, we at Women*’s Campaign would like to restate our commitment to ensuring all students at Oxford are educated as to their choices and the control they have over their reproductive health.” They also said that they "firmly believe that abortion is a human right" and they were "concerned that a student society whose ideology revolves around the removal of reproductive freedoms was allowed to promote such views at an SU event."

The Oxford SU was also contacted for comment, who supported the actions of the activists by saying that "Oxford SU is unequivocally pro-choice and supports all people’s right to make their own decisions regarding their bodies." Including that they did not find correct to debate about the topic of abortion, which they consider a fundamental right, and apologized.