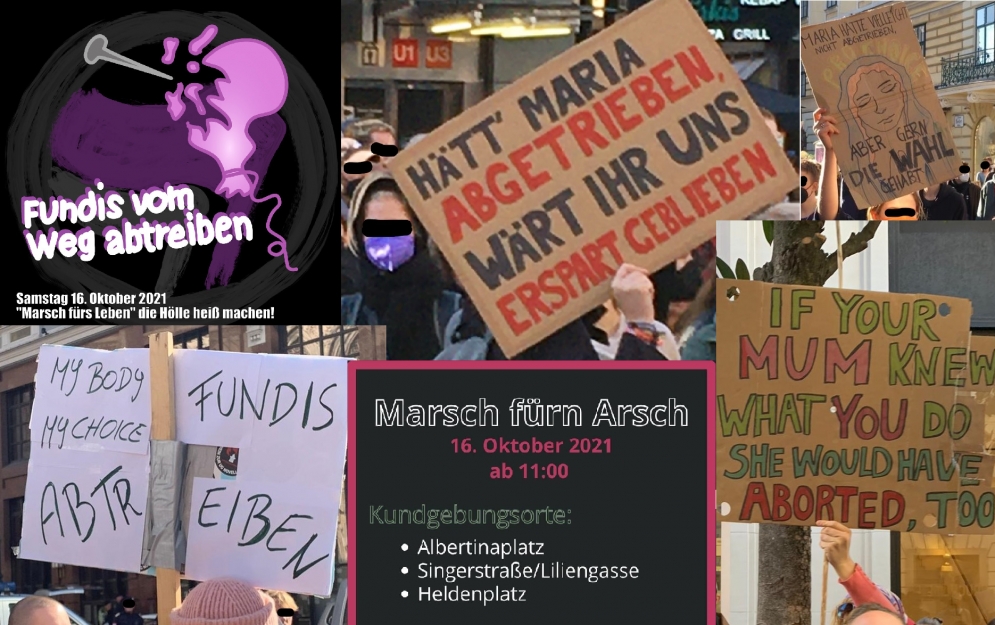 On the 16. October, around 2.500 people gathered for the "March for Life" in Vienna, a peaceful protest for the rights of the unborn and women. The participants faced opposition and insults from activists who planned to disrupt the march and create blockades, forcing them to change the route. The call against the pro-life march was made with polarizing language by different organizations, including the ÖH (Österreichische Hochschüler_innenschaft), which is the statutory representation of students' interests, Antifa, and other political groups. They organized a "March for Ass" and displayed anti-Christian slogans such as "abort fundamentalists" or "If Mary had aborted, we would have spared you". Jan Ledochowski, spokesperson for Christian Democracy filed a formal complaint.

Although spontaneous rallies are allowed, blocking the way for another demonstration is illegal, as it interferes with the freedom of speech of other citizens. The march was visited by all generations, including families with children and many groups of friends.

The "March for Ass" was organized and supported by different feminist, socialist and communist organizations, such as VSStÖ or KSV, who claim that abortion is a fundamental human right. Through different social media channels, they called for support and action against the March for Life, which they consider “patriarchal” and "fascist", despite the high number of women who were participating. The activists portrayed not only “pro-abortion” slogans, but also many anti-Christian messages like: “If Maria had had an abortion, we would have spared you” (Hätt‘ Maria abgetrieben, wärt ihr uns erspart geblieben“), “Mary probably wouldn’t have had an abortion, but she would have liked to have the option”. Anarchist messages could be also read: “Against the State and the patriarchate” (“Gegen die Staat and Patriarchat"). The huge majority of the Antifa participants were covering their faces.

Jan Ledóchowski, spokesperson for Christian Democracy has filed a formal complaint against the messages launched by the protesters for incitement to hatred and denigration of religious teachings, because of the level of aggression of the counter-demonstration, organized by the publicly funded ÖH, has reached a "new level”. He said that despite the hate shown by the “pro-abortion” participants, the "March for Life" remained a “good, noble and joyful thing”.

Also, many pro-life and Christian students have expressed their disappointment after seeing that the ÖH, the publicly funded student’s representation, openly supports and encourages actions that are against the freedom of assembly and freedom of speech of other students, teaching to combat dissenting opinions through violence rather than through debate and understanding. The organization "Pro-life Uniwien" circulated a video on Instagram, with several testimonies of students feeling disrespected and not represented by the ÖH.

Photo: Collage from Fotos at Christdemokratie