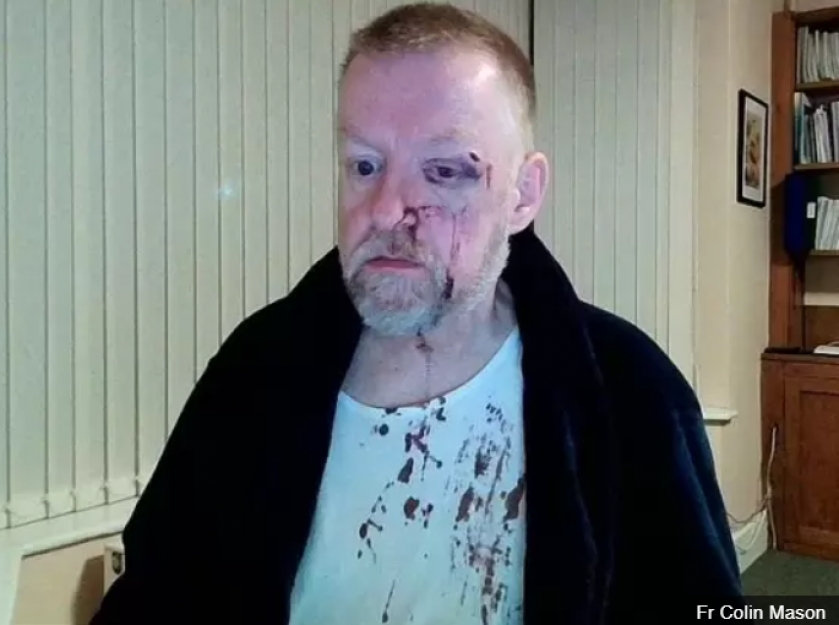 Father Colin Mason of Sacred Heart Church in Westbury-on-Trym has addressed a complaint letter to the police after the investigation about the attack he suffered was dropped. The incident took place back on 20. August when 60-year old Priest told a group that was renting his church hall for a wedding party that they had gone past the agreed time. Immediately after, he was held by four men, while one man - probably in his late 20's - punched him until he was covered in blood and left him lying on the ground. He said the initial response from the police was very efficient, but he did not hear any news for a month. As he called asking for an update, they told him that the case had been 'filed'.

Father Colin Mason shared a picture of his shirt and bruised face after the physical assault at 11 pm. One can also see that his eye socket was fractured. He accuses the Avon and Somerset Police of not doing anything and dropping the case without further investigation, in response, the police have reopened the case. The Priest also spoke to MailOnline and explained that the church hall had been rented out for a party, which was supposed to end at 10 pm that night. After waiting around an hour, he decided to talk to the group, as the music was still very loud and he was responsible for renting the hall. As the police came, they ended the party, which had been going on over an hour before Father Mason tried to intervene. The police also took the data of one of the organizers of the event and took Father Mason to the hospital.

"It doesn't give you confidence in the police if they are not prepared to investigate a violent crime." The spokesman for Avon and Somerset Police has said: "The complaint has been assessed and formally recorded by our Professional Standards Department. We cannot comment further until that review has been concluded and the complainant updated."

He also recalled the incident "He was half my age. I’m 60 and he was late 20s. He was very aggressive. I said who’s in charge and he said "I am". There were four of them who dragged me out and then he beat me up." According to the BBC, the partygoers did not identify Father Mason, as he was wearing normal attire, and thought that he was a "racist" man. The partygoers also said Father Mason had fallen, and that was the reason for his injuries, which he says is "simply false".

Father Mason also told to MailOnline, that as he explained what happened to his congregation, they were "outraged." He said: "There are people in my congregation who are retired police officers, my fellow priests are former police officers. We’re very closely plugged into the police here and they all said it was simply not acceptable, given the level of violence and injuries you can’t close those cases. It’s too violent."