Arson to Shrine Dedicated to Our Lady of Lourdes in Scotland 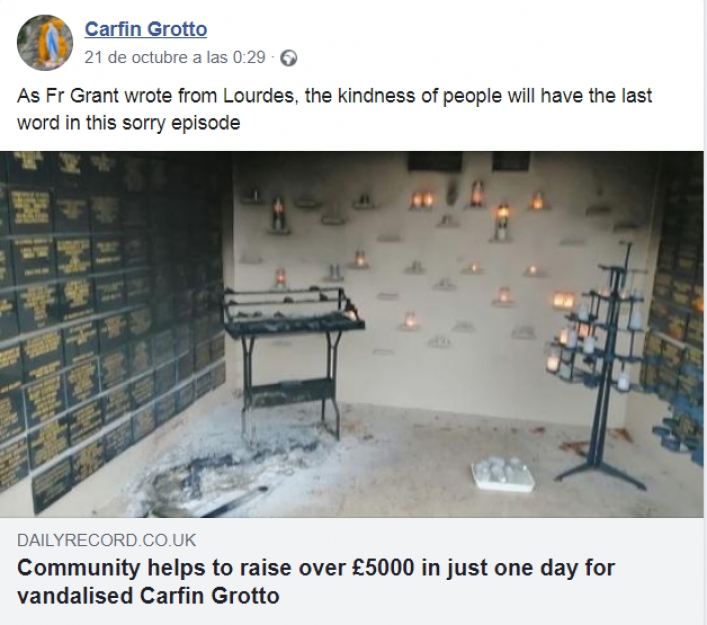 On October 17, the Carfin Grotto, Scotland's National Shrine to Our Lady of Lourdes, appeared partially burnt and destroyed as unknown perpetrators deliberately made a pile and set it on fire. As Police reported, "Enquiries are ongoing and at an early stage". Meanwhile, the community has launched a micro-funding campaign to help pay the damages due to the lack of economical means. However they are even more concerned about the rise of attacks against religious places, "we hope it is addressed at a national level", said the spokesman, John Mallon.

As reported to John Mallon, spokesman of the shrine: “We know it was deliberate because items were added in a pile and set on fire within the Lourdes memorial cave.” Mallon added, “It is worrying for Catholics that so many acts of vandalism and destruction are reported up and down the country. We hope it is addressed at a national level.” Indeed, the number of religious places that are being vandalized or attacked in the country is increasing.

To start repairing the damages that the arson caused (such a the destruction of memorial plaques, candle stands, etc) Carfin Grotto has launched a crowdfunding campaign in the hope to get at least 1,000 euros for helping repair this historical church for the Catholics of Scotland, who represent the 16% of the population. As the spokesman said, "Covid has reduced a lot of our annual intake by reducing pilgrimages so we are already on a tight budget before this attack."

The place has been open without interruption since 1922, where they welcome over 70,000 pilgrims each year. This year they are preparing to celebrate its centennial anniversary in 2022.