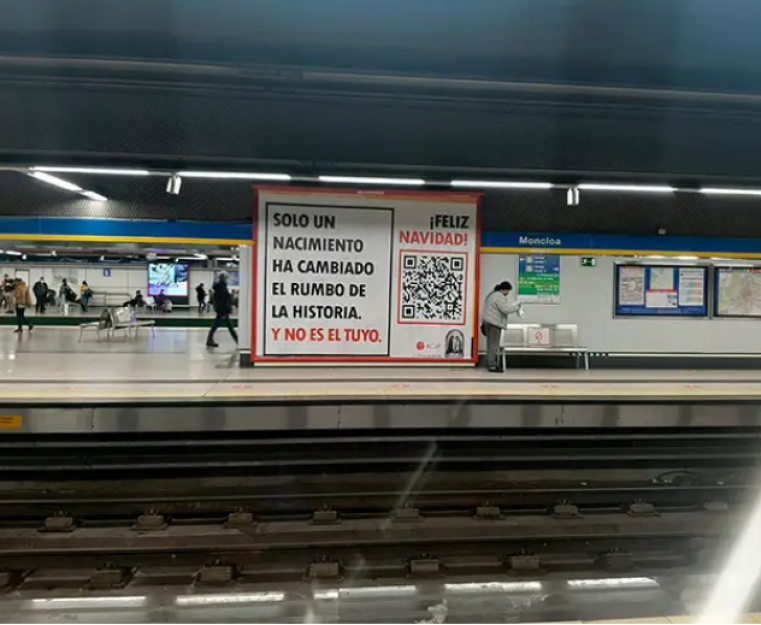 A Catholic marketing association (ACdP) denounced on the 23rd December, that the three municipal public transport companies operating in Barcelona had censored a Christmas campaign that reminds people about the birth of Jesus as the centre of Christmas. The message that was meant to be displayed throughout the whole country was not visible in Barcelona. The slogan said: "Only one birth has changed the course of history. And it is not yours. Merry Christmas!". It aimed to vindicate the Christian meaning of this holiday with humour. The company Transportes Metropolitanos de Barcelona (TMB) censored the message because the authorities considered it "ideological".

The Catholic Association of Propagandists (ACdP) set more than 450 advertisements throughout Spain. According to a statement issued, ACdP asked TMB for explanations as to why they were not allowed to wish "Merry Christmas" in public. In response, "those in charge of managing the advertising referred to the company's internal regulations, which prohibit the advertising of 'ideological messages or messages about individual beliefs'," ACdP explained.

However, exceptions were made with recent campaigns. The ACdP recalled that "TMB has allowed recent campaigns that could fall into this category, such as the request for amnesty for pro-independence prisoners that Òmnium deployed in February 2020 or the calls to 'Win independence' by Assemblea Nacional Catalana (ANC) this past September".

The ACdP decided to move the campaign to the street, with 15 marquees that were to be installed in various parts of the city," but this was also not allowed. "Their location had been closed and agreed with an exclusivist, but at the last minute, the association was told that these would not be put up either. There will therefore be no presence of the campaign in Barcelona; the 15 marquees have been moved to L'Hospitalet de Llobregat, where there are finally 17 of them," the Catholic organisation wrote.

The ACdP pointed out that the posters, which can be seen in Madrid and Bilbao metro stations, "seek to put Jesus Christ back at the centre of Christmas celebrations".