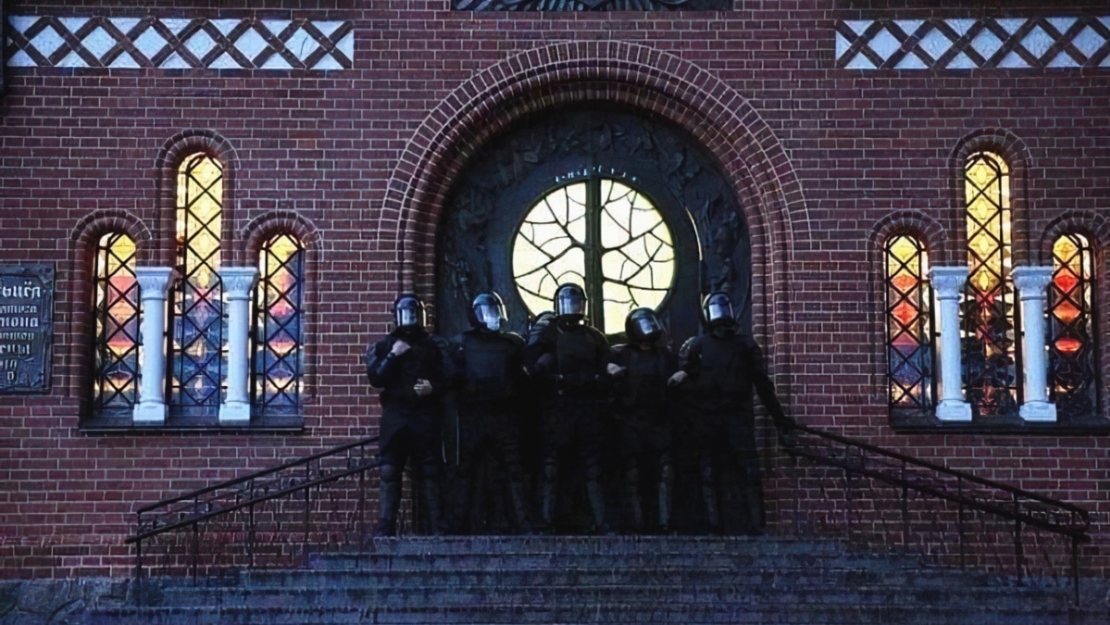 After a fire on September 25, where arson has not been ruled out, media sources reported on October 6 that Belarusian authorities are terminating the Red Church's use agreement with the Roman Catholic parish community of St. Simon and St. Helen. Notice of this has already been received by the church authorities and the parish has been ordered to take all belongings from the temple within a few days.

The Church of Saints Simon and Helena, commonly known as the Red Church of Minsk is one of the symbols of Minsk, as it is on Independence Square in the very center of the city, right next to the Government House of Belarus.

On the night of September 25 to 26, a mysterious fire started in the church, and although it did not cause any casualty or major material damage, the church has remained closed to the faithful since that date, even the priests are not allowed to enter. A little after the fire started the fire department arrived and the flames were extinguished. Although there was minor material damage, the authorities decided to close the entire sanctuary "until all firefighting systems and electrical equipment are completely repaired and in working order", and to this day it cannot be used.

The portal "Związek Polaków na Białorusi" (Union of Poles in Belarus) reports that the night of the fire unknown perpetrators attacked the church breaking a stained glass window on the first floor of the sacristy annex, the same place where the fire started. It also mentions that when the emergency call was made, the militia (police), the Investigative Committee of Belarus (an investigative body on criminal cases and extremist crimes), and even the OMON (Special Purpose Militia Unit, i.e., riot police) showed up at the temple along with the fire department.

Belarusian Catholic activist Artiom Tkaczuk reminds on his Facebook page that the last time authorities closed a Catholic church was in summer in Budslav, which also suffered from a fire. But the difference is that the fire in Budslav was vast, and the church's vault threatened to collapse. And even though it was closed at the time, the authorities allowed bishops and priests to enter the place, while now no one is allowed into the Red Church of Minsk. He also reports other similar cases in the post.

Earlier, the parish reported that investigative actions were carried out during the past week, and video surveillance data was removed. The parish released the following statement on its website on October 4:

"In this regard, the priest-abbot Vladislav calls everyone to prayer with the intention of restoring the normal operation of the Red Church as soon as possible and attaches to the prayer a clean fast (only water), in which he is on his second day. We pray and ask you to join your fasts, if possible so that the Most Holy Sacrament can return to the temple as soon as possible and God's house would not be humiliated."

Another statement was released on October 8 informing that Rev. Vladislav was already fasting for one week and a call urging the faithful to sign the petition for the "Restoration of the work of the Red Church".

On October 1, Father Vyacheslav Barok, a renowned Belarusian preacher who had to leave the country due to the repression of the Belarusian authorities, commented on the situation surrounding the Red Church in Minsk on an interview given to Belsat TV. The portal Kresy24.pl transcribed the following excerpts:

"As they say, it's darkest under the lantern. The more you listen to (official) explanations, the more questions arise. I know that it was on September 26 that a meeting between Bishop George Kosobucki and catechists was to be held at the Church of St. Simon and St. Helena." The clergyman also admitted that he has the impression that this is a deliberate action or even a "provocation by the Lukashenko regime, and perhaps already by Putin." According to Father Barok, a lot of facts indicate that the Belarusian authorities have succeeded in pacifying the Catholic Church in the country. This is confirmed by the silence of its hierarchs, which makes the Church in Belarus look more and more like a catacomb church.

"During the occupation it is difficult to preach the Word. But buildings with crosses continue to preach. The building itself is a call. The red church evokes the desire to live in truth, in righteousness. We remember that it was in this temple that prayers for reconciliation, peace were held, there was active life. Temples cannot be put in prison, they can only be destroyed, just as the authorities destroyed Polish crosses and graves in Grodno, because they also preached. What is taking place is not the norm, it is rape and lawlessness. It was only possible to isolate the room where the fire was. But the purpose of the authorities in this situation is completely different. And all that remains for the faithful is to pray."

The Belarusian Catholic website katolik.life reports that believers on their own initiative have been going to the walls of the church to individually pray the Rosary with the intention of the quick return of the church for the needs of the parish, although often overviewed by the Police or OMON commandos. Radio Svoboda Belarus also reports that recently the school in the Catholic Christian Social Center of Minsk was also closed by the authorities.