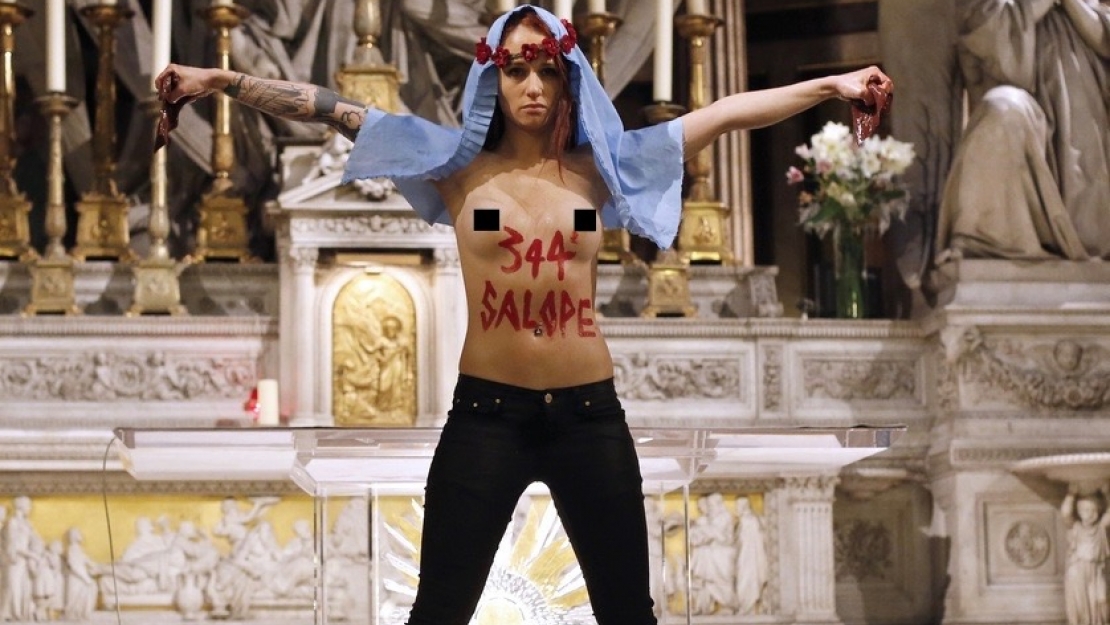 The European Court of Human Rights has recently concluded that Eloïse Bouton, a "Femen" member who performed a topless act simulating an abortion of Christ by the Virgin Mary in front of the altar and tabernacle of La Madeleine Church in Paris in 2013, has to be compensated. She had been sentenced by the French court to a one-month suspended prison and 2,000 euro fine for "sexual exhibition". She had also desecrated the altar of the church with urination and anti-Christian slogans and symbolism. With this ruling, a dangerous record of precedents is being created that will only encourage more blasphemous attacks on Christians.

The European Court of Human Rights (ECHR) has overturned the original decision by the French court that sentenced Eloïse Bouton, at the time a militant of the feminist group Femen, to a one-month suspended prison sentence and 2,000 euro fine for "sexual exhibition". Now France has to pay her 2,000 euros for emotional damage and 7,800 euros to cover court and travel expenses.

On 20 December 2013, Eloïse Bouton entered the church of La Madeleine, in Paris, and exposed herself, in front of the altar and the tabernacle, urinating on the steps of the altar, topless, tattooed, with her arms crossed, wearing a crown of thorns and the blue veil of the Blessed Virgin, and holding "two pieces of ox liver in her hands, a symbol of the aborted baby Jesus". On her chest were written the slogans "Christmas is cancelled" and "344th slut" in reference to the manifesto of the 343 pro-abortion feminists in 1971.

After three stages of trials, ending in 2017, the French courts condemned Eloïse for “sexual exhibition". Nonetheless, the defendant took the case to the ECHR alleging that her "freedom of expression was being violated", and now the Court has ruled in her favour. The ECHR’s judgment criticizes the fact that the French judges had found Bouton guilty of sexual exhibition, claiming that they "limited themselves to examining the question of chest nudity in a place of worship without considering the meaning of the act". According to the Court, the meaning is the following:

"In view of its militant nature, the applicant's [Eloïse Bouton] action, which sought to express her political convictions in line with the positions defended by the Femen movement on whose behalf she was acting, must be regarded as constituting a "performance" falling within the scope of Article 10 [Freedom of Expression]. The purpose of the bare-breasted performance by the applicant, which was organized in accordance with the procedures laid down by the Femen movement, was to convey, in a symbolic place of worship, a message relating to a public and societal debate on the position of the Catholic Church on a sensitive and controversial issue, namely the right of women to have free control over their bodies, including the right to have an abortion."

What this redaction of the ruling expresses is that the Court is openly siding with the attacker not only in the sense that it considers that their idea of “Freedom of Expression” is to be protected over “religious sentiments”, but also portrays a biased stance towards the pro-abortion position.

This ruling is not the first one where the ECHR has considered “freedom of expression” a blatant attack against the feelings of millions of Christians. The European Centre for Law and Justice (ECLJ) recalls in their post commenting on this ruling, among other cases, the decision of the ECHR to acquit the Russian feminist group “Pussy Riot” after they invaded the Cathedral of Christ the Saviour in Moscow and staged a blasphemous performance as a form of “freedom of expression”. In contrast, the ECLJ also explains that when it comes to offending the sentiments of the followers of other religions, the ECHR has ruled in their favour over “freedom of expression”, which is the logical outcome expected from the court. This contrast in the approach to the religious sentiments of Christians in comparison with those of other religions shows the double standards of the ECHR and their disregard for Christians in general.

With this ruling, a dangerous record of precedents is being created that will only encourage more blasphemous attacks on Christians. It would not be surprising if the number of similar cases increases in the future, shielded by the ECHR’s wrong notion of freedom of expression.

The Chamber of the ECHR that ruled on this case was composed by these judges: