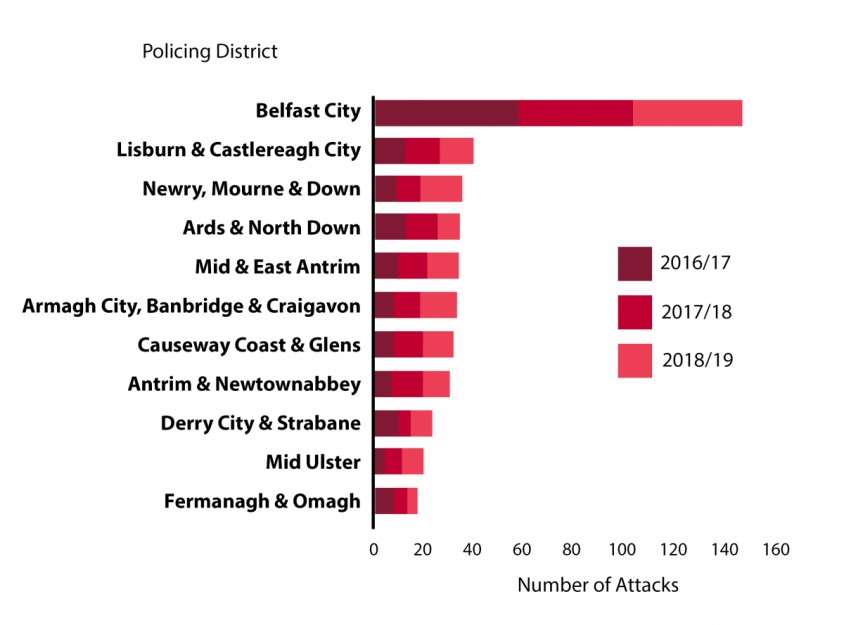 Places of worship across Northern Ireland have been subject to nearly 450 recorded attacks over the last three years, prompting calls for immediate action to protect churches and other religious buildings.

Following a freedom of information request, CARE NI can exclusively reveal there were 445 crimes recorded as criminal damage to religious buildings, churchyards or cemeteries in Northern Ireland across the 11 policing districts in the last three years.

On average this means a crime against a place of worship has taken place almost every other day.

In one particularly shocking example, Saintfield Road Presbyterian Church suffered two arson attacks in July 2016 and it took a full two years for the church building to be repaired. In another more recent example on Easter Sunday this year, a key date in the Christian calendar, the Sacred Heart Church in Ballyclare was attacked with paint.

On August 21, 2019 CARE NI called for more support to be made available to churches and other religious buildings and the charity will be writing to all party leaders, asking for a specific manifesto commitment to set up a fund in NI like the Places of Worship: protective security funding scheme which is available to religious buildings in England and Wales.

Created in July 2016, the fund provides financial resources for places of worship so they can buy security measures such as CCTV, fencing and lighting. The scheme’s funding was boosted to £1.6m in 2019, with a further £5m to provide security training for places of worship, but at the moment there is no comparable scheme in Northern Ireland.

“Following two arson attacks on our Church in July 2016 the initial response was one of anger and frustration quickly followed by asking “Why”?

“There then came a sort of grieving period as we grappled with the practicalities of how to manage the restoration of the buildings. In time that was replaced with excitement, anticipation and hope as a newly refurbished building took shape. Looking back as a congregation we most firmly believe that out of what men meant for evil, came good and blessing."

“As a congregation we would welcome any initiatives by Government to protect Churches from further attacks.”

CARE Northern Ireland’s Policy Officer, Mark Baillie said: “Our research shows that there are crimes being committed against places of worship nearly every other day in Northern Ireland.“It’s not limited to one location and there are recorded examples in every policing district across the Province."

“These are concerning figures and clearly action needs to be taken. In a free and democratic society, no-one should be afraid of gathering together with those who share their faith in a place of worship."

“These attacks leave religious groups with property damage, potentially large insurance costs and fears of future attacks. The security protection funding scheme which is available in England and Wales for places of worship should be extended to Northern Ireland as a matter of urgency."

“We will be writing to all party leaders, calling on them to include a manifesto commitment to introduce such a scheme, which would undoubtedly be welcomed across NI.”