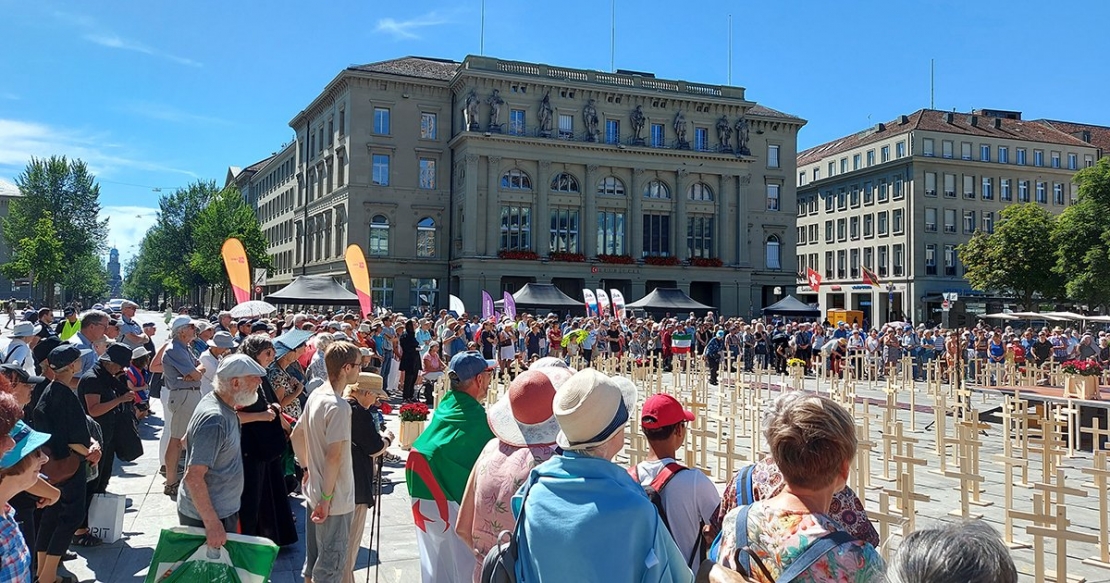 The Working Group for Religious Freedom (AGR) of the Swiss Evangelical Alliance (SEA) wrote "The number of people persecuted for their faith is increasing sharply worldwide. Christianity is the religious community most affected. 360 million Christians experience persecution, that is one in seven Christians worldwide," in a statement when announcing the event.

The Slogan for the demonstration was "We are not silent!", as they want to give a voice to victims of religious persecution who are usually silenced through fear, torture, and imprisonment. During the performance, an Iranian Christian spoke about what it means not to be able to live one's faith freely in one's own country.

Sacha Ernst, head of one of the aid agencies that sponsored the event, warned that in view of the rapidly rising numbers, the persecution of Christians would not stop at the gates of Europe. He urged the media, politicians, society, and the assembled participants to shed light on this injustice, to put human rights before economic interests, and not to remain indifferent, but to act. "The fact that there are ways to improve the sad reality raised hope at the end of the demonstration," said the organizers.

The Working Group for Religious Freedom (AGR) consists of the organizations Open Doors, Help for People and Church (HMK), Christian Eastern Mission (COM), Christian Solidarity International (CSI) Switzerland, Action for Persecuted Christians (AVC), Light in the East (LIO) and Eastern Europe Mission Switzerland (OEM). Their goal is to raise awareness and mobilize the general public to speak up against faith-based persecution and discrimination. The group also encourages the Western church to be informed and support persecuted Christians in their respective countries so that they can freely live out their faith and also contribute to their societies.