Aid to the Church in Need 2018 Report: aggressive nationalism is fueling religious hatred —West is failing to act 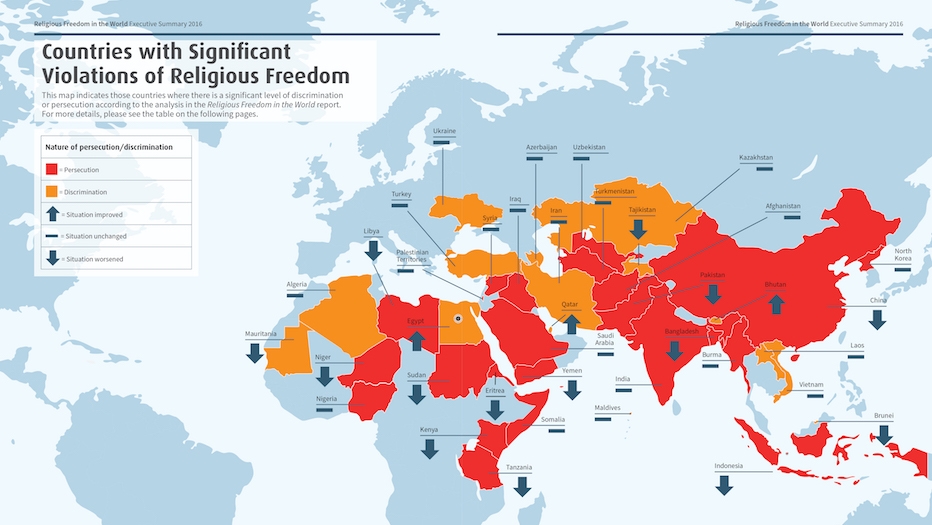 A surge in aggressive nationalism in key parts of the world is to blame for a rise in violence and other intimidation targeting religious minorities—and the West is failing to convert words of concern into action. This is one of the principal findings of a new report on the state of religious freedom around the world produced by Aid to the Church in Need (ACN), an international papal charity that serves the persecuted and suffering Church.

Assessing all 196 countries around the globe, the Religious Freedom in the World 2018 Report concludes that “ultra-nationalism” by both government and non-state actors has caused a spike in hatred against faith minorities in countries including leading regional powers such as India, China and Burma (Myanmar).

The report, produced every two years by the charity Aid to the Church in Need, finds that religious illiteracy, including within the media, and the lack of political action in the West, has exacerbated the problem, concluding that many faith minority groups suffer behind a “curtain of indifference”.

The report says most governments failed to offer displaced minority faith groups the help they themselves have requested to enable their return to northern Iraq and elsewhere following the ousting of Daesh (ISIS) and other militant groups.

The investigation by the Catholic charity finds that media coverage about militant Islam has focused almost exclusively on the fight-back against Daesh and affiliate groups during the period under review – 2016-18 – and has largely ignored the relentless spread of militant Islamist movements in parts of Africa, the Middle East and Asia.

According to the report, a main driver behind the growth in extremism is the growing clash between Sunni and Shi’a, the main rival branches of Islam.

The report states that in the 25-month review period the situation for minority faith groups deteriorated in almost half of the countries classed as having significant violations of religious freedom – 18 out of a total of 38 countries.

Worsening intolerance towards religious minorities meant that for the first time in the report’s 19-year history two new countries: Russia and Kyrgyzstan – were placed in the “discrimination” category.

The report adds that in a number of cases, such as Saudi Arabia and North Korea, the situation was already so bad that in the period under review it was virtually impossible for it to get any worse.

Turning to the West, the report highlights a surge in extremist attacks by militants against targets in the West.  Such terrorism striking at the heart of liberal democracies means that the threat can be called “neighbourhood terrorism”. The report says the danger from such terrorists is “universal, imminent and ever-present”.

Religious Freedom in the World 2018 underlines in this context the growth of both Islamophobia and anti-Semitism in the West as well.

Summarising the report’s main findings, Editor-in-Chief John Pontifex said: “Aggressive ultra-nationalism – be it by hard-line governments or violent extremist groups – means many minority faith groups feel like aliens in their own country. They are easy targets in a new era of ignorance and intolerance.

“True, there are some like the Rohingya Muslims, whose plight has received due attention in the West, but so many others – such as Christians in Nigeria, Ahmadis in Pakistan and Baha’is in Iran – feel abandoned by the West where religious freedom has slipped down the human rights priority rankings.”

Read the full report here and the executive summary here.