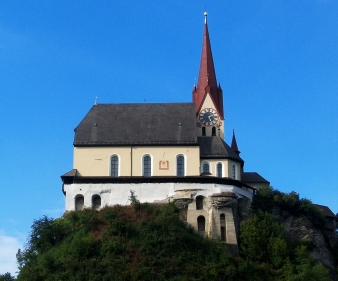 During the 18th or 19th of April, unknown perpetrators vandalized a stone retaining wall in Rankweil with pink paint. Over ten meters, they sprayed the words "Deth (sic) to all Christians!" as well as a pentagram symbol. The retaining wall on Thomas-Lehrer-Weges leads to the Basilica of Rankweil, the pilgrimage church of Our Lady of the Visitation. 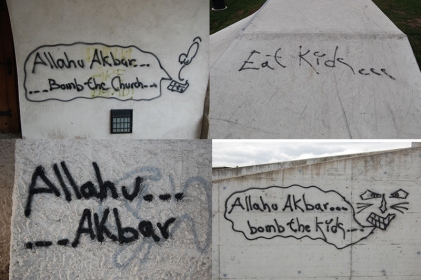 Over the weekend in Ybbs (district of Melk) graffiti with messages such as "Allahu Akbar" ("God is great"), "Bomb the Kids," and "Bomb the Church" was found in various areas of the town, including on a church. Police began an investigation and offered a reward for information. 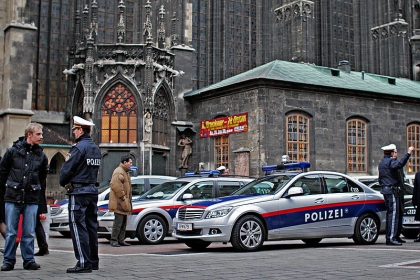 In the early morning hours of September 30th, an unknown burglar entered the door to the northern tower into the cathedral in Vienna. After stealing a donation box, the individual fled. The cathedral is secured by an alarm system with a direct connection to the police station, which was triggered at 5:15 am. Seven police cars and several police dogs arrived to investigate, but were unsuccessful in locating the perpetrator.

Several confessional doors in the Church of the Holy Family in Kapfenberg (Diocese of Graz-Seckau) were set on fire. Because the fire was quickly discovered by church visitors, a greater degree of damage was avoided. The property damage includes the confessionals, a song book stand, and charred song books. Police were called to investigate.

According to police in St. Stefan im Rosental, three roadside Jesus figures were forcibly removed from crosses, demolished, and stolen. Only parts of the figures remained on the crosses. All three cases were reported between August 31st and September 5th, 2017. In total, a loss of several hundred euros was incurred. Police investigated.

The figure of a crucified Jesus Christ was destroyed, left hanging without arms or legs, on a wayside cross on a hiking trail in the district of Harla. The vandalism was discovered during the weekend of September 2, 2017. The priest of the parish of St. Johann im Saggautal expressed the community's shock, noting that offertory boxes had been broken in the past, but this extent of violence against a crucifix is "shockingly new." A complaint was filed by the diocese.

Unknown perpetrators broke into the church, forced open the sacristy door. They caused enormous material damage, including cutting all electrical cables, destroying armchair upholstery, tearing the tabernacle from the altar, destroying the Easter candle, and stealing a few hundred euros in cash. In addition, the vandals poured sand on the church floor and made the sign of a pentagram, according to the police.

During the night of August 23, 2017, burglars broke into the parish church in Schwadorf through a terrace door. After being unable to break into the office, they entered the priest's apartment. According to police, cash and valuables were stolen, including a jewelry box and a clock. Afterwards, the perpetrators sprayed a fire extinguisher on the floor in the entrance of the apartment, in the stairwell of the parish center, and on the ground floor, to obliterate their footprints. The church was equipped with an alarm system, but the priest was not at home at the time of the incident, so no one heard the alarm. A passerby discovered the break-in in the morning and reported it to the police.

Break-in and Vandalism at Erlauf Church

Unknown perpetrators broke into the church in Erlauf sometime during the night of August 20-21, 2017. All the money in the church had been removed on the Sunday after the Mass, but the sacristy was ransacked, with boxes emptied and overturned. It is unclear whether anything was stolen. This was the fourth break-in at the church. 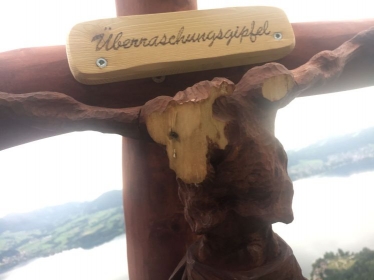 A hand-carved figure of Jesus Christ on a cross was placed at 789 meters on the north side of the Traunstein mountain in Gmunden, Austria by members of the alpine club as a gift to a member. They discovered the statue had been decapitated with a saw when they arrived to present the gift on August 7, 2017. Police are investigating.

Statue of Saint Beheaded in Neusiedl am See

Unknown perpetrators broke off and stole the head from a 300-year-old statue of Saint Rosalia in the middle of the main square of the town in Burgenland. Police initiated an investigation after local residents discovered the vandalism on July 27, 2017.

A group of youths filmed a man as he attacked a life-sized Jesus figure on a cross in the church square of St. Marein. The man, identified by police as a "37-year-old from the Weiz district," first shook the cross to make it fall but when unsuccessful he then proceeded to rip out a wind organ from the ground and hit the cross with it. The man’s rampage continued within the church grounds as he broke the two glass doors of the parish and several flower pots before being arrested. Damage is estimated to be well over €15,000. 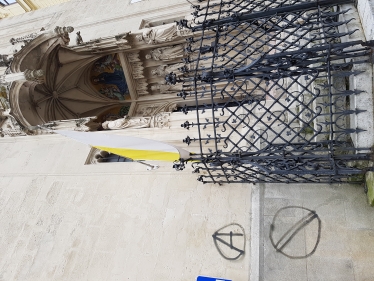 The outside walls of the church of Maria am Gestade was sprayed with the anarchist A symbol and the word "Antifa."

On New Year's Eve, unknown perpetrators vandalized a chapel, damaging a statue of the Virgin Mary and burned prayer books and wooden objects nearby. Damages are estimated at around 1,000 euros. Police are investigating.

Chapel in Brunau am Inn the Victim of Theft and Vandalism

Unknown perpetrators beheaded a statue of St. Barbara and stole a Christ figure from a cross and several other sacred objects. Damage is estimated at around 5,000 euros. Police are investigating.

Unknown perpetrators broke into the chapel, threw stones at the altar, smashed two glass domes containing statues of the Virgin Mary, and stole and destroyed 22 paintings and murals hung by pilgrims visiting the chapel.

Woman Attacked for Reading from Bible

A 22-year-old man from Afghanistan stabbed a Christian woman when he heard her reading from the Bible at a refugee accommodation in Vöcklamarkt (Upper Austria).

During the children's performance in Schwanenstadt, attended by parents and relatives, a 24-year-old Somali man with a backpack and plastic bag got on stage and began waving the Koran around. When people tried to remove him, he resisted and began shouting "Allah." The police investigated.

Christian refugees in various accommodation centers in Austria endured abuse at the hands of Muslim fellow refugees, including being forced to wake early in the morning to pray, being told they were impure, having belongings stolen, and instances of physical violence.

Freedom of Religion Hate Incident Insult or Incitement Intolerance towards Religious Symbols
Pages: 1 Count: 10 20 50 100
We use cookies to ensure you get the best experience on our website. Learn more