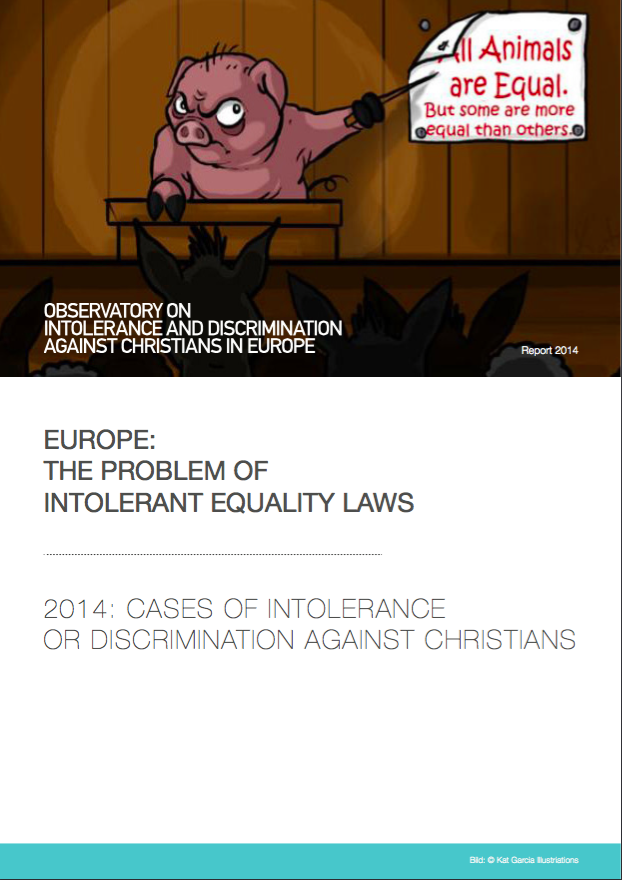 The Observatory's Report on Intolerance and Discrimination against Christians on the Year 2014 was released on May, 4th, 2015.

This report portrays the 150 most striking cases of intolerance against Christians in Europe in the year 2014, and presents the problem of militant equality laws:

While awareness regarding religious freedom is growing, legal projects are under way to place restrictions on religious freedom especially for Christians. A key concern is the so-called horizontal equal treatment directive which is being pushed at the level of the European Union and partly also nationally. This report explains the scope and the associated problems of such legislation and provides key examples of the consequences.

Dr. Gudrun Kugler, director of the Observatory, explains: „Equality before the law was achieved over centuries by liberation movements. It has now turned into equality of moral choices, equality in statistics of how men and women live, and equality of how individuals treat each other. These understandings deviate quite far from the original meaning of equality before the law, which we rightly hold on to. Yet, this development remains largely unchallenged. It currently mounts in the adoption of intolerant anti-discrimination legislation being debated at the EU-level and at many European national levels. A number of human rights – especially of Christians in Europe – are at stake: Religious freedom, freedom of conscience, and private autonomy are in great danger.“

Read more and download the Report as free pdf