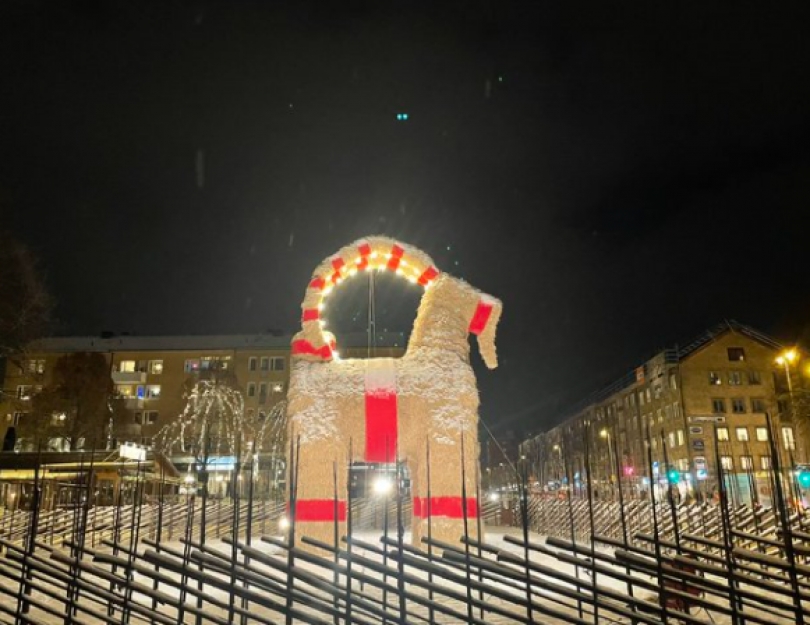 A giant straw goat, which has become an annual highlight in the Swedish city of Gavle, has been burned by an arsonist. A man, in his 40s, was arrested at the scene after the structure was set on fire, in the early hours of the 17th of December. Every Christmas since 1966, the Gavlebocken (Gavle goat) has been put up in the city's central Castle Square, but it has become a usual target for arsonists and vandals. The Gavlebocken annually draws visitors to Gavle, which is built up the first Sunday of Christian Advent. A big concert accompanied the goat's inauguration at the end of November.

The goat has been attacked several times before but, since 2016, it survived every festive period with 24-hour security. Spokeswoman Rebecca Steiner claimed she felt devastated by the attack on the seasonal institution. "It's just a week before Christmas and I cannot understand how a person can carry out this kind of attack to a Christmas symbol known all over the world," she told the BBC.

It had already been rammed by a car and has survived an attempted kidnapping via helicopter, but mostly it has been targeted by fire. In the first year the Gavlebocken was displayed, in 1966, it was burned down at midnight on New Year's Eve.

A smaller strwa goat, a "little brother" to the Gavlebocken had already been set on fire on the 12th of December. The fire brigade was alerted but the goat burned down so quickly that it was beyond saving.