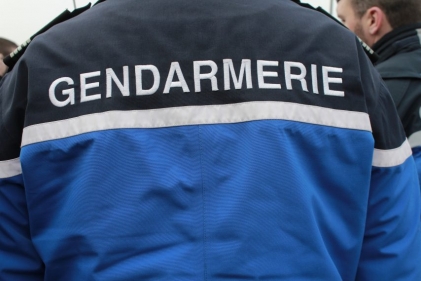 A 38-year-old motorist stopped a man who was heading towards a church in Blanc-Mesnil, armed with a loaded machine gun, shouting "Allahu akbar." 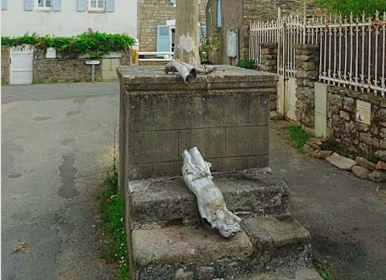 Vandalism of Christ of Calvary on l’Île d’Arz

Unknown perpetrators broke the Christ of Calvary of Grèavo on the l’île d’Arz during the night of July 19th to 20th. The Christ figure was knocked off the large public crucifix and broken into several pieces. "A silly act, a sacrilege," reacts Christophe Stener, a local historian and resident. "Human stupidity has no limits. Whether one is a Christian or not, this act is revolting." The gendarmerie are investigating. 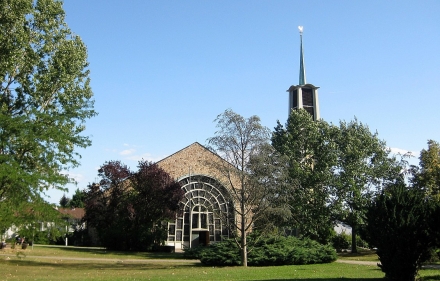 Window Front of Church in Bad Soden Smashed by Vandals

Unknown perpetrators destroyed the glass front of a church in Bad Soden on July 19th. The vandals smashed the glass panes of the Catholic Church in Salinenstraße, causing property damage amounting to several thousand euros. The police are investigating and asked for witness statements. 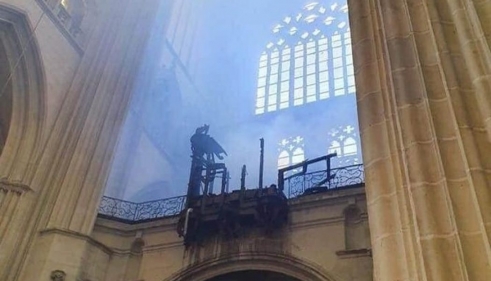 In the early morning hours of July 18th, a fire began in the Saint-Pierre-et-Saint-Paul cathedral, in the heart of Nantes. Passers-by saw flames behind the rosette window of the cathedral and alerted emergency services a little before 8:00 am. When firefighters arrived, they discovered "a violent fire at the level of the organ located behind the rosette window." Upon further investigation, it appeared that the fire had started in three locations: one fire had started near the organ, while the other two were at the other end of the cathedral. 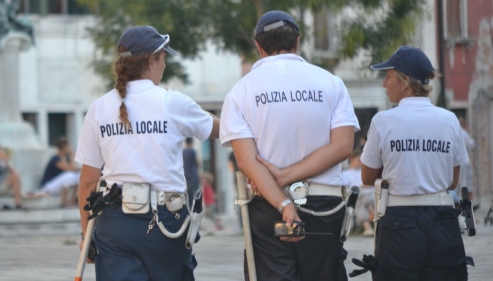 Theft and Vandalism of Tabernacle in San Giovanni Church

During the night of July 18th unknown vandals smashed the tabernacle under the image of Mary in the side altar of San Giovanni church in Trieste. Additionally, two valuable brass candlesticks were stolen. Don Sergio Fransin discovered the vandalism and theft and immediately reported the crime to the police. 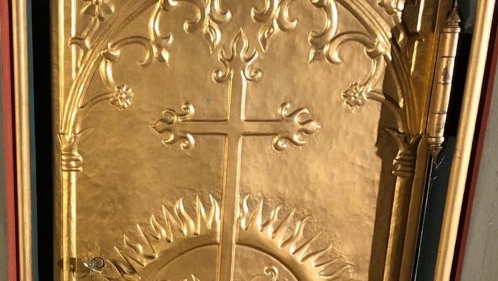 Satanists Suspected of Theft and Desecration in St. Johann Baptist Church in Krefeld

Unknown perpetrators have stolen the golden door of the tabernacle, a monstrance stance and money from an donation box. The tabernacle door was forcefully torn out and the donation box vandalized and money stolen. The community of St. Johann Baptist Church suspects satanists to be the perpetrators, who use the stolen objects for satanic rituals, because the golden altar cross was not stolen, which speaks against just a monetary motivation. 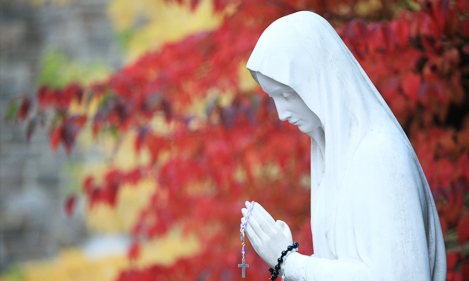 Pilgrams to the miraculous spring of our Lady of Banneux discovered the severe mutilation of the statue of the Virgin Mary, which is situated above the spring. It is speculated that the vandalism took place in the week before July 17th. The face of the statue has been particularly mutilated therefore, the statue was replaced by an exact replica. 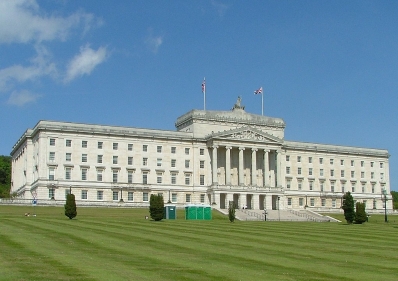 The Parliament of Northern Ireland passed a new marriage law for same-sex couples, which has two implications for the church and Christian business owners. The law prohibits private business to deny service to same-sex couples arguing for freedom of conscience. Additionally, the new legislation allows same-sex couples of faith to have religious wedding ceremonies in church or other religious settings if all parties agree. 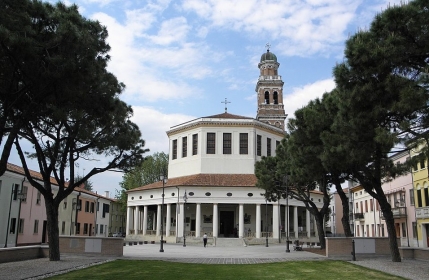 The portico of the Church of Beata Vergine del Soccorso, known locally as La Rotonda, is often used as a meeting place for young people in the city of Rovigo, despite an ordinance against it. Several times in the weeks before July 16th, mostly young people illegally climbed onto the historic porch and vandalized it, with a least one of them being caught on security cameras using it as a toilet on May 30th. The local police began an investigation. 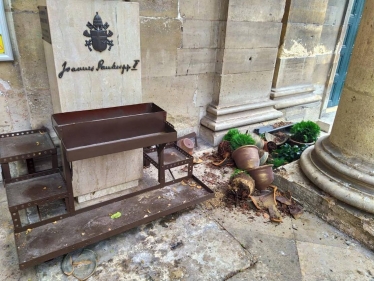 A bust of John Paul II, situated next to the entrance of the Church of the Assumption of the Blessed Virgin Mary, because the permission to build it on the square in front of the church was denied, was severely vandalized by unknown perpetrators. Although the street of Saint Hornore has surveillance, the case has not been reported to the police yet by the parish. 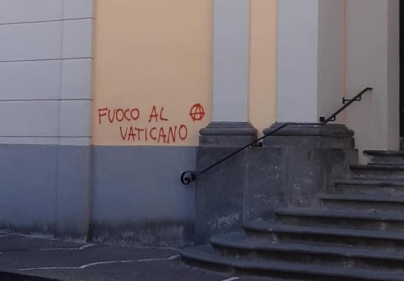 During the night of July 15th, vandals attacked various sites in the city of San Giorgio a Cremano near Naples, including the church of Santa Maria del Principio with graffiti. One tag on the church read "Fuoco al Vaticano." The city hall gate and the headquarters of some political movements were also targeted. The city's mayor, Giorgio Zinno, said the symbols and slogans demonstrated the vandals' anti-Catholic, anti-democratic, and anarchic ideology. The police are investing the case by analyzing the recordings of the public security cameras. 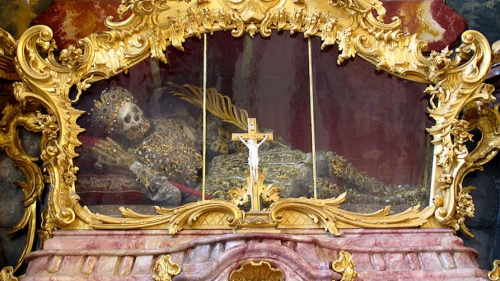 Theft of Relics in the Church of Honfleur

On July 15th the church of Saint-Léonard was a victim of theft. Parish priest Pascal Marie discovered that the contents of four relics were stolen. One relic is of special value, as it enshrines the bones of Saint Boniface, which are said to date back to the 8th century. The case was reported to the police. The estimation of the damage is difficult to evaluate because only the bones were stolen and the other valuable objects left behind. 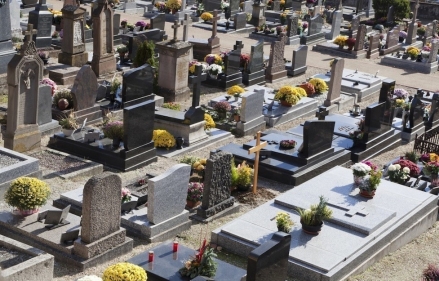 Three Vandalism Incidents at Cemetery of Lézignan-Corbières in July

On July 15th, 24th, and 27th the cemetery of Lézignan-Corbières was repeatedly vandalized and various objects were stolen, such as crucifixes, crosses, vases, flowers, decorations, and plaques, . Gravestone plaques were dismantled, damaged, and reassembled elsewhere, and objects were moved. The perpetrators also attempted to open several graves. A police investigation was opened and the cemetery was closed to allow investigators to collect evidence for their investigations. 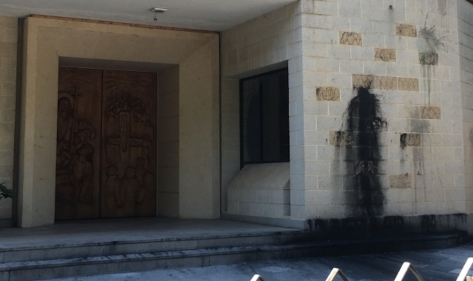 On July 13th, a black paint bomb attack on the granite facade of San Pietro church occurred for the fifth time in two years. After a respite of a year, once again community members of the church again had to remove the damage using solvents to clean the oily back paint. This time, the vandals used twice as much paint than in previous assaults, making removal from the porous granite difficult. 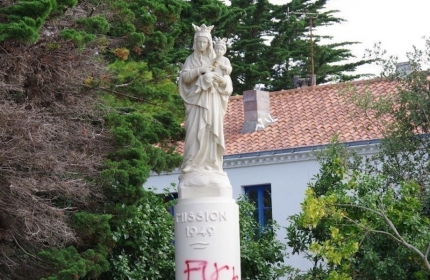 During the night of July 13th and 14th the Marian statue of Noirmoutier-en-l'Île was vandalized with obscene red graffiti. The monument to commemorate the end of a parish mission in 1949 had previously been restored after being decapitated in 2018. 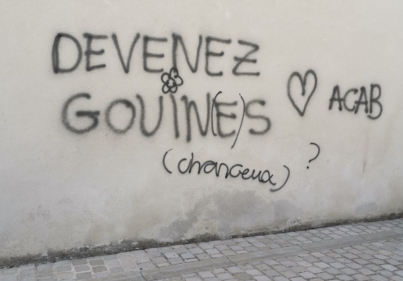 During the night of July 11th, the outside walls of Saint-Martin Basilica in Tours were sprayed with offensive graffiti (a cruder version of "become lesbians"), as well as the familiar anarchic tag "ACAB". The graffiti is clearly visible at the entrance of the basilica and was probably intended for the Benedictine nuns of the Sacred Heart of Montmartre, who serve in the basilica. The police took photos and are investigating the case. 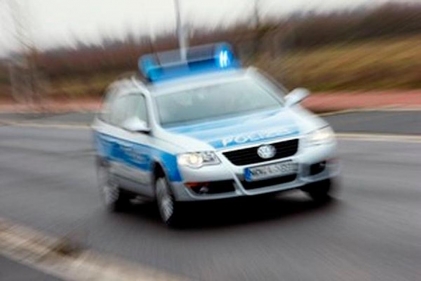 In the night of July 10th unknown perpetrators forcibly opened the door of the Holzan church of St. Joseph and tore a plant and its roots out of a pot. The perpetrators then threw the plant in front of the church. The police opened an investigation. 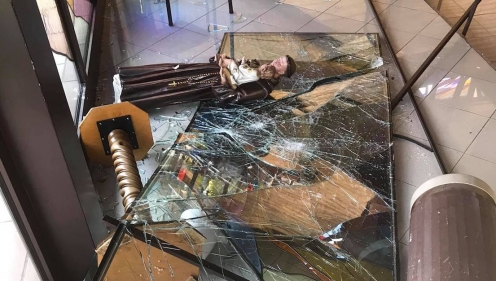 Vandalism and Attempted Theft at the Verbanella Church in Castelletto Ticino

On July 8th an act of vandalism and attempted theft was discovered in Castelletto Ticino in the Verbanella Church. One stained-glass window was smashed into pieces, which also caused a damage on a statue of St. Anthony of Padua that fell on the ground. The police are investigating the incident. 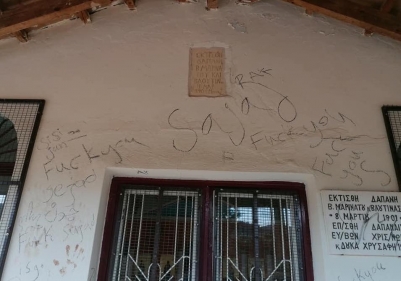 Desecration of Saint Silas Chapel in Lesvos with Obscene Graffiti

In the latest in a series of vandalism and desecration incidents, unidentified perpetrators invaded the Saint Silas Chapel on July 8th, where they desecrated the interior, smashed windows, and sprayed obscene graffiti on the outside walls. The graffiti showed a clear bias against the local residents by writing phrases such as "f&*k you" on the walls. Despite the repeated complaints of residents no further action has been taken. 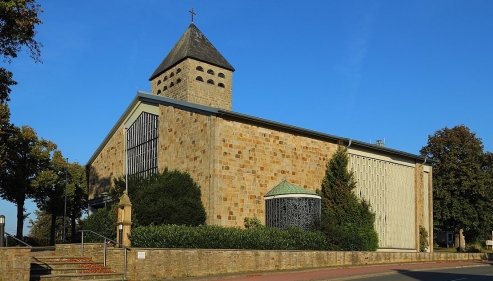 Unknown perpetrators smashed two windows of the chapel of the Josefskirche in Rodde between July 5th and 7th causing at least 500 euros in damage. The police began an investigation.