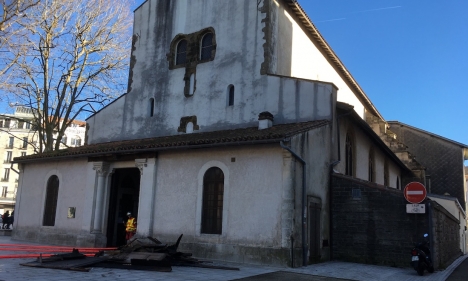 A man suspected of committing the January 11th arson attack on the Saint-Esprit church in Bayonne was arrested the following day. Investigators were able to quickly determine that the fire had been deliberately set and video surveillance images made it possible to identify the suspect who was seen in the images leaving the church a few minutes before the first smoke was visible. The fire, which left no one injured, was brought under control by the firefighters but the suffered extreme smoke damage. 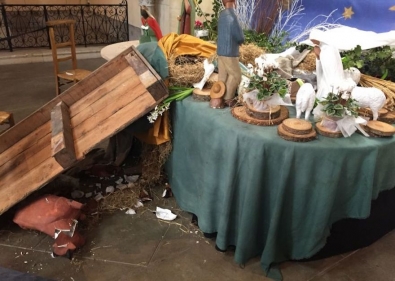 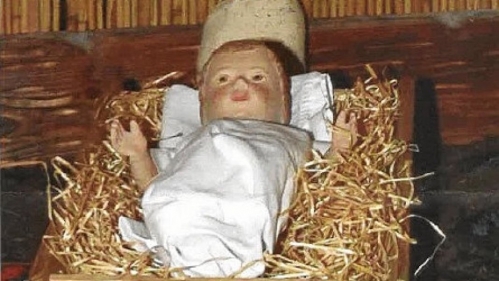 The Lüneburg police opened an investigation into the theft of the Jesus figure from the church on Friedenstrasse between January 10th and 11th. 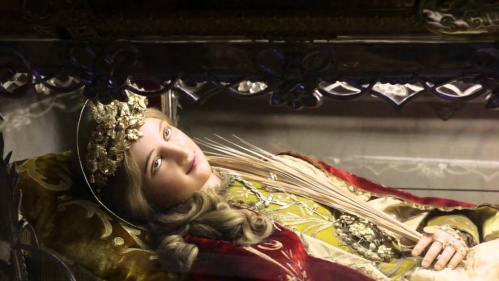 Vandalism and Theft in Borgolavezzaro Church

Just before 4 pm on January 10th, at least three men entered the church of Santi Bartolomeo e Gaudenzio and broke through the thick glass case of the shrine carved out of a side altar containing the containing the urn of Santa Giuliana, patron saint of the town. Using a crowbar, the thieves also broke the glass of the urn and stole a rosary crown, a gold crucifix, rings, and other valuables worn by the patron saint's mannequin. The figure's left hand was the most damaged, with two destroyed wax fingers.

During the night between the 8th and 9th of January 2020 unknown perpetrators vandalized the historic building of St. Elisabeth-Kirche in Berlin-Schöneberg with black and white paint, sprayed the words “Pro Choice” on its entrance doors together with other unidentifiable symbols and glued the parish hall doors closed. A purported confession letter was later posted on the extreme left platform de.indymedia.org, naming a Berlin feminist/left-wing radical alliance as responsible for the vandalism. 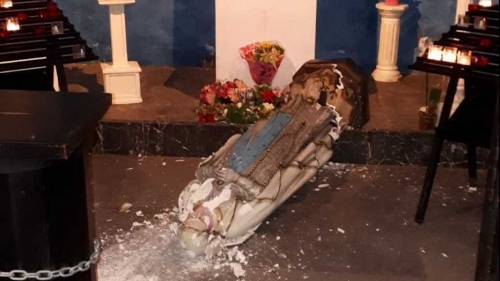 On the morning of January 9th, in the space of 45 minutes, five statues of the Virgin Mary, located in three different churches of Pau (Pyrénées-Atlantiques): Saint-Martin, Saint-Jacques and Notre-Dame, were destroyed. Similar vandalism continued in the churches of the Béarn communes of Lons, Artix, Denguin, and Mourenx, where, each time, a statue of the Virgin was destroyed. A 35-year-old man, described as homeless, was arrested in Mourenx at the end of the day and sent for psychiatric evaluation. 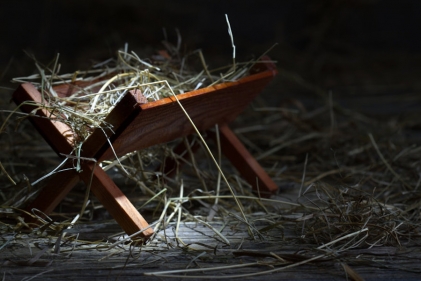 The Christ child figure was stolen on Christmas Eve from the nativity in the church of San Giovanni Battista in Fabriano (Ancona). Volunteers purchased a new figure to replace it. The new figure was then stolen from the San Filippo church around Epiphany, but returned a few days later. 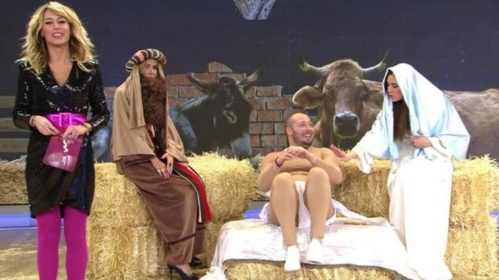 Although it was intended to be "funny," the performance shown on the "Viva la vida" television program on the afternoon of January 5th was offensive and disrespectful to viewers. Taking advantage of the fact that that afternoon the typical Three Kings' parade was taking place, the program chose to parody the scene, using their presenters as protagonists. "Shameful" and "it is a lack of respect and humiliation" and "I am a Muslim, but this seems disrespectful to me, it is not necessary to play with the beliefs of Christians to try to be a trending topic" were some of the phrases that appeared on Twitter after "Viva la Vida" published an image of the performance. 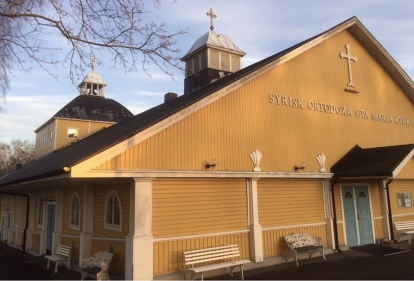 On January 5th a fire was discovered in the meeting room of Syrian Orthodox St. Maria’s Church in Norrköping. After firefighters extinguished the fire, investigators classified it as arson. Just a month before, on December 3rd 2019 a similar incident occurred when someone poured gasoline outside the church and lit it. Those two fires were not the first time the building fell victim to a suspected arson attack. In August 2018 police investigated another case. The church assembly has been discussing plans enhance security, including enlisting volunteers take turns guarding the church at night to complement the police patrols and security cameras. 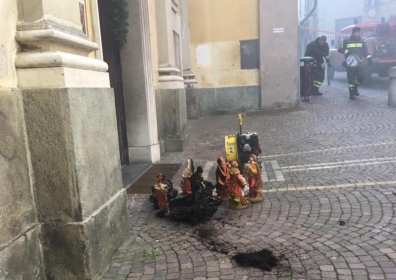 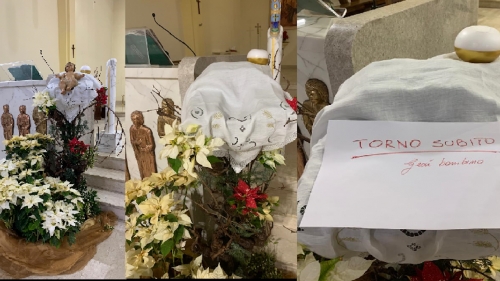 The parish of Sacro Cuore in Trapani reported the theft of the Christ figure from the nativity scene in the church on January 4th. 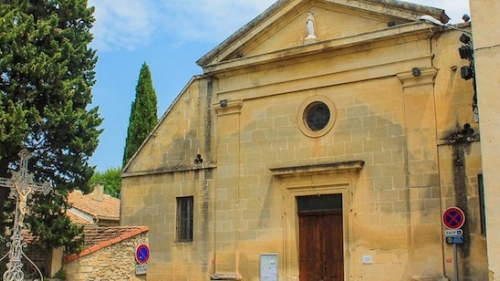 A statue of the Virgin Mary was stolen from the church of Notre-Dame-de-l'Assomption in the town of Saint-Étienne-du-Grès on January 2, 2020. 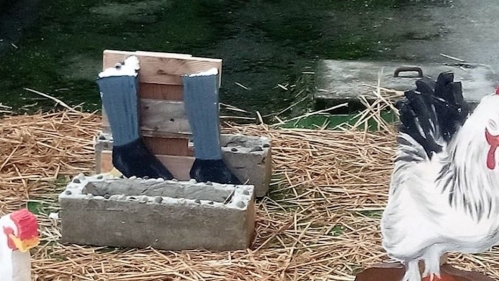 The nativity scene installed by Alice Castello volunteers was repeatedly vandalized at the end of December and into the new year, with the figures broken and some of the statues beheaded. This was the third year in a row that this installation was attacked by vandals. 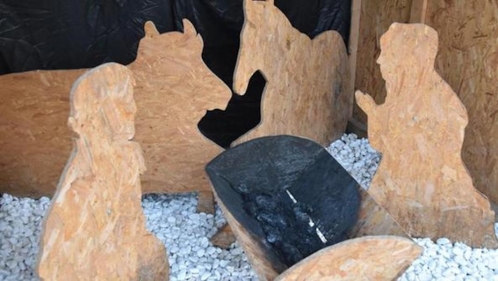 Inhabitants of Pedemonte were shocked to discover that the figure of the baby Jesus in the nativity scene erected in the Piazza San Rocco church square was burnt on New Year's Eve. Only the charred remains of the figure were left inside the blackened wooden cradle. 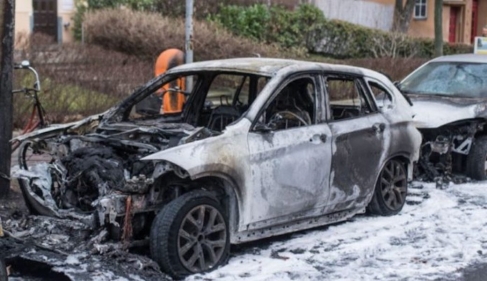 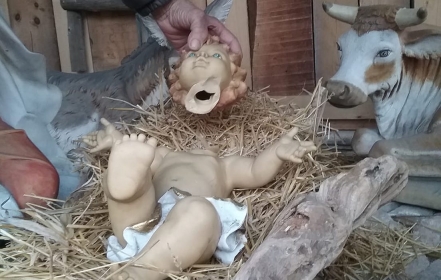 Jesus Statue Beheaded in the Crèche of Caprino Veronese

Parishioners at the New Year's Day Mass learned from the priest that the statue of Jesus was no longer in the cradle in the nativity scene in Piazza San Marco in Caprino Veronese because it had been decapitated the night before. 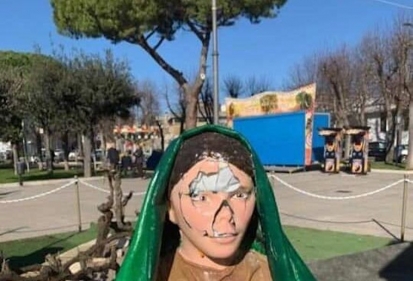 Statues in the nativity scene in Piazza della Libertà, Lizzanello (Lecce) were vandalized by unknown perpetrators during the night of December 31st. The faces of several of the handmade statues were smashed. 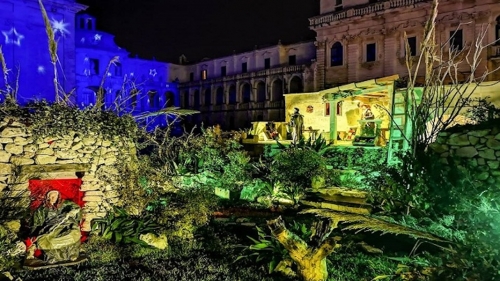 On New Year's Eve, a man riding a bicycle was filmed by security cameras stopping at the crèche in Lecce's Piazza Duomo and stealing the Christ child figure. 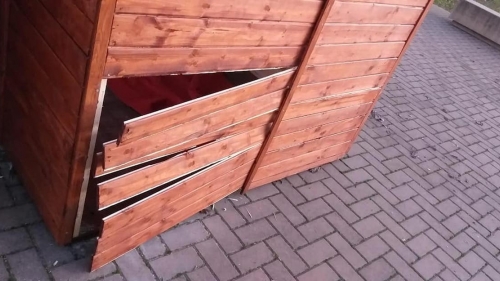 Volunteers from the volunteer association Pro Loco of Robbiate were forced to take down the nativity installation prematurely due to repeated vandalism. Vandalism included detaching wooden planks from the hut, dismantling pieces of the roof, and throwing away ornaments and furnishings. The display was dismantled on December 29th instead of January 6th. 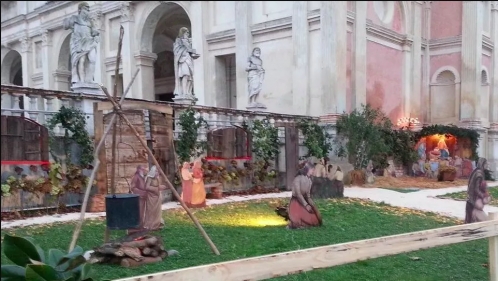 Four teenaged boys were identified and referred to the Public Prosecutor at the Juvenile Court of Bresci on allegations that they vandalized the statue of the Christ child in the nativity scene in the piazza outside the basilica in San Benedetto Po. The day after the incident, police found the head and torso of the statue hanging on an iron pole on the opposite side of the piazza. Evidence collected led the police to the four perpetrators, described as Muslims, born in Italy, of Moroccan descent. They reportedly admitted their involvement in the incident.