Obscene and offensive messages have been scrawled over a Bible at a taxpayer-funded exhibition in Glasgow.

Council Puts up Christmas Lights in August to Cater All Faiths

Residents of Milnrow, Lancashire, were surprised to see council workers installing Christmas lights in August 2009, 127 days before Christmas Day. Rochdale Borough Council said the lights would be used to celebrate a number of festivals, starting with the Muslim feast of Eid in September. Other ‘holy days’ over the period between August and Christmas include Hindu Diwali celebrations in October, the Jewish feast of Hanukkah in December and even Yule, the pagan celebration of the winter solstice. The Council’s decision attracted derision from the national press and Milnrow residents. One local labelled the move “ludicrous” and said: “A worker told me they had to be up in time for all the religious festivals, but most of the lights refer to the Christian Christmas.”

Pop-singer Madonna performed on August 15, the main Marian feast day of Polish Catholics, in Warsaw with for Christians offensive lyrics and images. Ads included sentences such as “There is no room for two queens in that country.”

Paediatrician Dismissed For Christian Views And Reinstated Upon Public Outcry

Experienced community paediatrician dismissed from adoption panel over Christian views has been reinstated upon public outcry.

Around twenty churches were vandalized on the night of July 26th in commemoration of the centenary of the „Tragic Week“ (a series of blood sheding fights between the Spanish army and the working classes) in Barcelona.

Christian Murdered Because of Faith

German entrepreneur murdered in Istanbul most likely because of hatred towards Christians. CNN-Turk and Agence France Press quote the murderer to have stated in an interrogation that he had aimed at "killing Christians".

Repetitive Violence and Vandalism Against a Church in Toulon

The church of the Sacred-Heart of Toulon has been for the past two years the target of malevolent acts. Urine was found in the baptismal font, a church responsible was seriously assaulted, the tabernacle was vandalized and many thefts and degradation are to be deplored. The church had to be kept closed for several weeks in 2009.

A Priest Threatened And Assaulted In Toul

Father Noël became a victim of intimidation and threats in Toul over the course of a year. He finally decided to leave the district of la Croix de Metz in Toul.

A new Irish initiative that would grant rights to homosexual couples contains no conscience clause and lays out fines and potential prison sentences for registrars who refuse to carry out same-sex civil partnerships. Concerns from church leaders disregarded as Bill passes Second Stage consideration.

Seven-year-old taken away from his family by Swedish authorities at Arlanda International Airport in Stockholm, for being home educated, although home education was legal in Sweden at that time.

Access to Justice and Legal Services Rights of Parents

The Belfast church which had offered refuge to Romanian immigrants after a racisst attack was itself attacked. 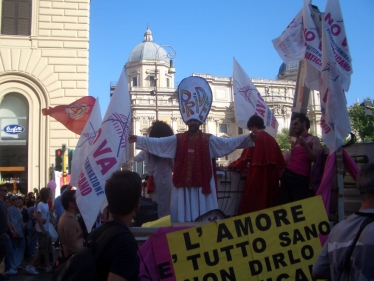 The City Major of Rivas-Vaciamadrid, José Masa, announced that he was going to organize a celebration for children between the ages of 8 to 10 similar to the religious first communion upon the request of the community. The festivities would be called "fiestas del florecimiento" (flowering festival). "It would be a 'laity first communion'; but I do not want to call it this way because then, the right wing blames me for the celebration of laity baptisms and marriages using Catholic Church rituals", he clarified.

German Gay and Lesbian Association in opposition to two speeches on Psychotherapy congress on whether sexual orientation could be changed if wished for. Speeches had to be delivered with police protection. Anti-Christian counter-demonstration portrayed Jesus as a pig nailed to the cross and used slogans such as: “We are here to hurt your feelings.”

A new Equality Bill which would have forced Churches to employ practicing homosexuals or transsexuals as youth workers was amended and retained existing employment exceptions for the purposes of religion.

“Angels & Demons”, a film adaptation of Dan Brown's novel of the same name released on May 15, 2009, is filled with historical inaccuracies and anti-Christian stereotypes.

Half a dozen swastikas found tagged on several columns in the basilica of Saint Denis, Paris.

A Medal Established by the Queen Withdrawn as “too Christian”

The “Trinity Cross of the Order of Trinity” has been replaced by an “Order of the Republic of Trinidad and Tobago” - a featuring a sun, stars, water and a map of the islands - as it was considered as offensive for non - Christians inhabitants.

A Cemetery Vandalized in Varilhes

During the night from Thursday 7th to Friday 8th, one or several individuals broke in the cemetery of Varilhes and vandalized numerous graves. Flower pots were broken, flower and funeral ornaments thrown in the alleys and graves were unsealed.