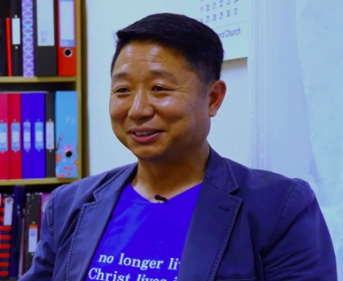 Christian prison chaplain Paul Song was suspended from work after he has made the incident when a group of Islamic extremists stormed a chapel gathering and hijacked his bible meeting public. After his Sunday Mail interview about the incident he was banned indefinitely from working in London jails. After being punished for whistleblowing and exposing the influence of Muslim gangs at HM Prison Brixton, he is taking legal actions. At the High Court hearing on January 12th the Lawyers will seek a judicial review of the decision.

The St. Lukas Church in Leipzig was vandalized with paint and stones by left extremists. The portal image was damaged with paint bags and windows were smashed with stones. On January 6th, the left extremist platformed indymedia, which is monitored by the Office for the Protection of the Constitution, claimed to be the originator of the attack in an online letter. It stated: "Assembly for Moria - Smash Christian-White Europe. We attacked a Lutheran church in Leipzig to start our Monday campaign for Moria. We attacked with stones and paint". The case and the validity of the letter will be further investigated. 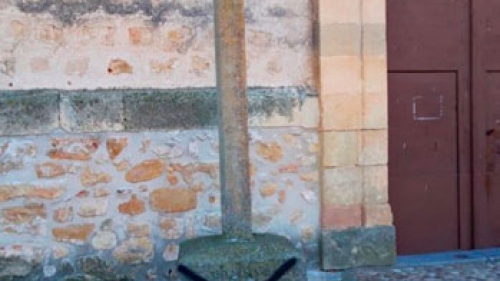 Vandals Smeared a Cross Near the Church in Valseca 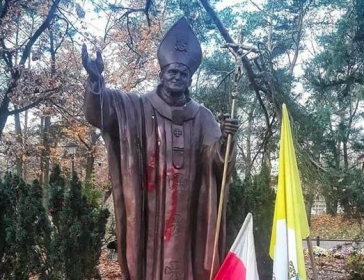 Unknown perpetrators vandalized a monument of John Paul II. The figure of the Polish Pope was smeared with red lightning paint, on September 11th. The sign has recently become a symbol of the women's strike, a social rebellion group against the tightening of the abortion ban. 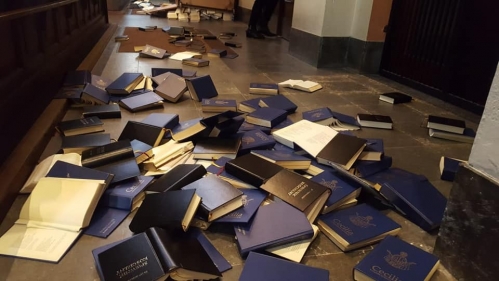 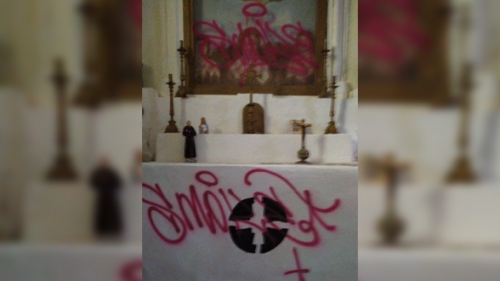 In Castrovillari, unknown vandals vandalized the chapel of the Madonna dell'Idria during the days before the 12th of November. The vandals smeared the altar with spray paint and the paintings above the altar, they also tagged the walls and some statues. The community was shocked at the sight of the images that circulated on the internet. 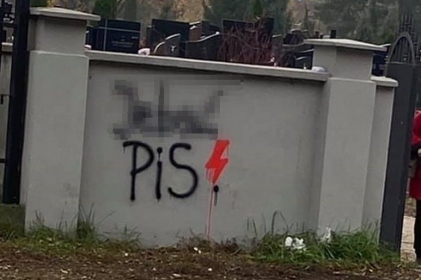 An unknown vandal smeared the outside wall of the parish cemetery in Legionowo with an insult to the PiS party and the symbol of the "Women's Strike" organization,the incident occurred on November 12th. It is unknown if the case was reported to the police. 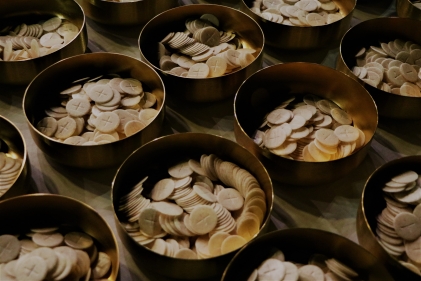 Major Theft of Sacred Objects and Altarpiece in Rüsselsheim

During the time of November 8th and 12th, unknown thieves broke-in into the St. Christopherus church in Rüsselsheim and caused a damage of around 15.000 Euros. The perpetrators stole the 60 kg handmade tabernacle, made of gold-plated brass. Around a hundred sacred hosts were inside the tabernacle. The thieves took another bowl with hosts and stole several hundred euros from the offerings. The police report did not mention the theft of the consecrated hosts, which are most valuable to the believers, but is investigating the incident. 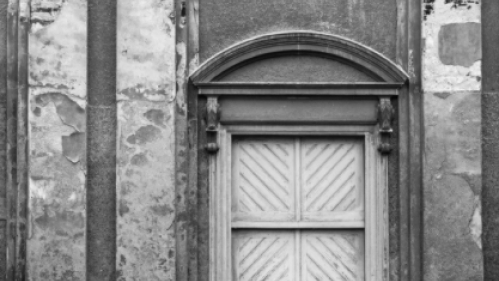 Swastika and SS Rune Branded on Door of Church in Rackwitz

Unknown perpetrators branded a Swastika and SS Rune symbol into the wooden door of the protestant church in the district of Podelwitz. The incident happened on November 8th. The police is investigating. The caused damaged is estimated to be some hundred Euros. 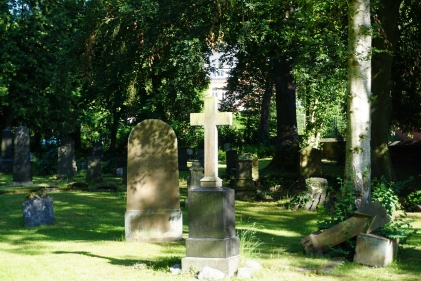 Desecration and Profanation of Tombs in France Have Increased

The devastation of cemeteries in France is an unfortunate ongoing phenomenon. This includes crosses being knocked over, slabs and monuments destroyed, tombs are looted or profaned and symbols and "anti-christian" tags are also common. Dr. Pierre Vermeren, a historian of the Sorbonne University, remarks the increase of these acts in the last 20 years in an interview on November 6th. France has 40,000 active cemeteries. In 2019 alone 1,052 of them were vandalized, explains Dr. Vermeren. 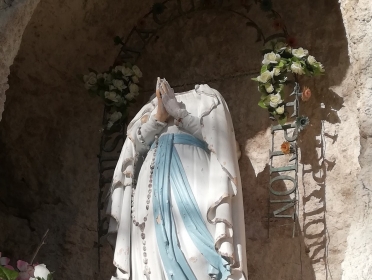 Statue of the Virgin Mary Beheaded and Vandalized

A statue of the Virgin Mary, a replica of the Grotto of Lourdes, was found beheaded on November 2nd in Montpezat-de-Quercy. The investigations showed that the perpetrators also threw stones at the statue, causing the destruction. The mayor and the priests have reported the act to the police. 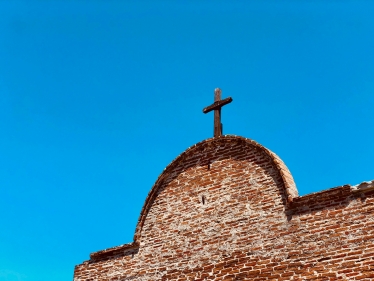 Theft and Vandalizm in Church in Nogent

A theft in the church of Saint Germain and Saint Eloi in Nogent took place in the week of November 1st. The church was not only looted but also vandalized. All metal objects and the consecrated hosts were stolen. A mass for reparation is to be held. 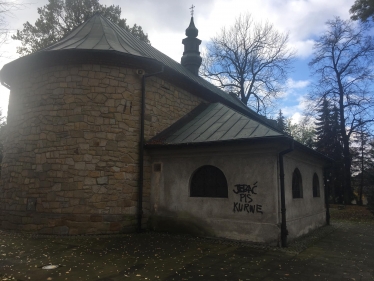 Unknown vandals sprayed a vulgar tag on the wall of the Chapel of the Immaculate Conception of the Blessed Virgin Mary in the Cemetery of Nowy Sacz on October 31st. The police is investigating and evaluating an estimate of the damage. 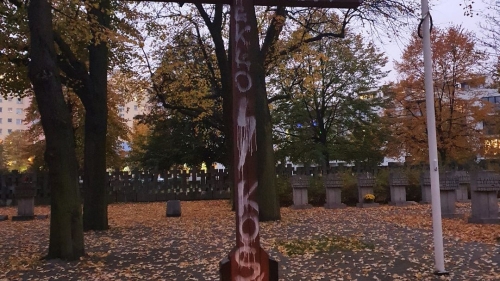 "Kill A Priest" and Other Insulting Tags on Cemetery Cross

In the Cemetery of the Victims of World War II in Gdansk, unknown perpetrators desecrated a cross on October 31st. On one side of the Cross the vandals wrote "Women's Hell" and "Kill a Priest" with white paint, and on the other side the cross was tagged with an insult against the PiS party. The incident was reported to the police. 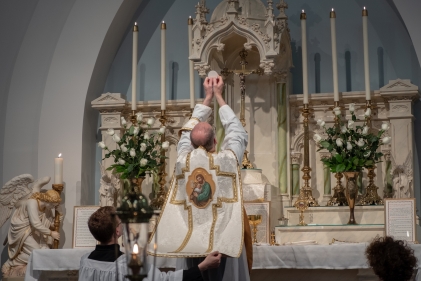 On October 30th the protests and acts of vandalism against the Church continue in Poland. In one incident protesters even acted violently. Two young girls entered the Church "Christ the Savior" in Gdańsk during Communion and disturbed it and were escorted away by a man. This caused a violent reaction and the young women tried to run back in to the church, being forced to stay outside, one of them hit a man on the head with her phone and shouted profanities. According to the witnesses, the other woman tried to kick a man and threatened him with a knife. 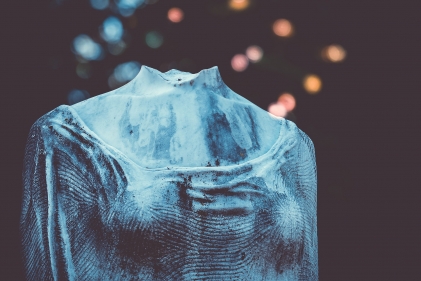 During the night of October 30th, unknown vandals entered the courtyard of the parish church of the Immaculate Conception of the Blessed Virgin in Chrzastawa Wielka and destroyed the statues of Our Lady of Fatima and other Saints. The police was informed and the parish informed. The police arrested a 46-year-old perpetrator on the next day. 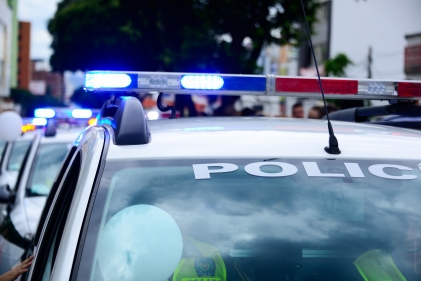 According to figures published by Countryside Alliance, a total of 212 crimes were reported against churches in Devon and Cornwall over the last year, reported by Cornwall Live on October 30th. The request of the Freedom of Information Act was made to the Police, which revealed the target of churches for lead thefts, but also vandalism, violence, assault and burglary. The government made a commitment to protect places of worship with a crime action plan 2016-2020, which should provide security measures at places of worship vulnerable to hate crimes. 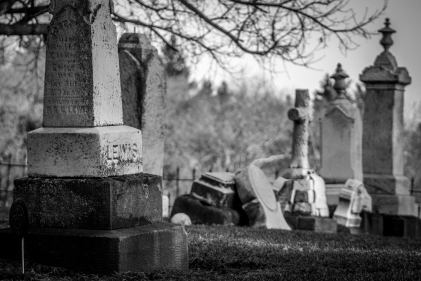 An act of vandalism at the parish cemetery in Luboszyce took place on the night of October 28th. Around 20 tombstones have been devastated by unknown perpetrators. Many crosses and gravestones have been overturned, some graves were opened and the small figures of angels or candles have been smashed. The police investigated the case and later arrested a 34-year-old man. 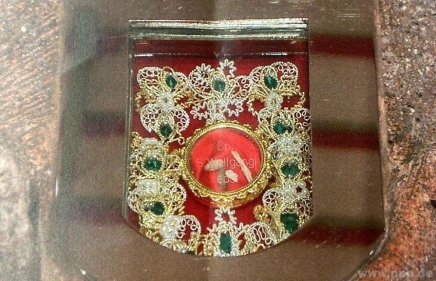 On October 26th, thousand-year-old relics were stolen from the St. Wolfgang church in Regensburg. The non-material damage is estimated at several thousand Euros, as the relics were the last mortal remains of the Saint. The relics were forcefully taken out of a bulletproof glass and steel case from the grave of St. Wolfgang, which is located in the entrance area of the church. The police is investigating and asking for witnesses. After ongoing investigations, the police says the thieves were professionals and that it looks like a planned act. 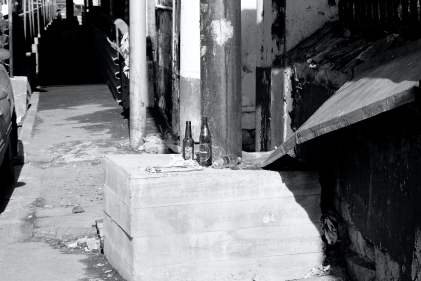 During the weekend of October 24th to 25th, unknown vandals left the Chiesa Madre and la Villa Borsellino with trash, beer bottles and a damaged door. The Archpriest, Mons. Salvatore Salvia expressed his dissaproval and dennounced the act.